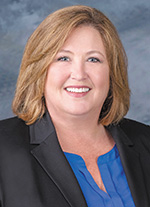 Women are driving forces in the fight against cancer. According to recent data from the American Cancer Society, 50 percent of research funded by the ACS is now conducted by women.

That realization was the motivation behind the organization's newest initiative aimed to promote women in science - ResearcHERS: Women Fighting Cancer. The program engages women of influence to raise funds that directly support women-led cancer research. The program spotlights the life experiences and discoveries of women in research and aims to inspire the next generation of girls to pursue their dreams of a career in science.

"This campaign burst out of the question, 'Does the ACS have a responsibility to help women support other women?'" explained Jenny Stripling, executive director of the American Cancer Society of Tennessee. "When we realized how much of what we're funding is being done by women, we realized it was a real opportunity for us to highlight and celebrate what's taking place."

Stripling hopes the campaign will encourage more young women to pursue STEM careers, which have traditionally been underrepresented by females. She also wants to encourage young investigators to apply for initial funding and to give them the courage to pursue larger grants from other foundations.

Nashville is one of 15 markets nationwide participating in the ResearcHERS campaign. Currently, the ACS is funding $9.95 million in research within Tennessee, including programs at Vanderbilt and St. Jude Children's Research Hospital in Memphis.

"As an organization, we want to put funds where the best science is," Stripling said. ACS ResearcHERS supports all cancer types and ages. The Society has a rigorous peer-review process to fund the most exceptional applications, regardless of cancer type, or gender of the applicant. Once the best research has been identified for funding, ResearcHERS funds will then be applied to women-led grants.

"The individuals working within that realm are making funding decisions based on the best science to move us forward in finding cures for cancer," Stripling said.

ResearcHERS' influential group of ambassadors are committed to raising a minimum of $2,500 each, serving as role models, and building awareness of the contributions of women in the fight against cancer. The campaign will run through May 2019. Stripling hopes more women will take an interest in joining the campaign and will continue to apply for funding through the ACS.

"There's always a place for someone with STEM interests to lean in and support each other and to encourage and help us in promoting this campaign," she said. "Our goal is to raise $125,000 in our first year, and I am thrilled to be carrying the torch for this inaugural ResearcHERS campaign."