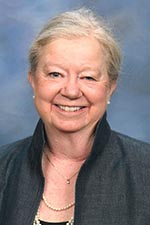 Sometimes, you just know when it's time. Such was the case for Sharon Adkins, MSN, RN, who retired from her role as executive director of the Tennessee Nurses Association Sept. 29.

"One of my goals in taking the position was to build partnerships with entities like the Tennessee Hospital Association and patient advocacy groups, and we've been able to do that," said Adkins, who led the state nurses association for 11 years. "We have a really good staff and an excellent board, and it felt like I was leaving at a time when the organization was very strong and could continue to move forward. I didn't feel like I was leaving anything undone."

While nursing is no longer a full-time job, Adkins is staying involved with the TNA through the Government Affairs Committee's legislative and patient advocacy work. "I'm not giving that up at all," Adkins said. "As a volunteer, I'm a TNA member, and I'm going to participate in that role." Adkins added some of her greatest memories during her time with the TNA included speaking to nursing schools across the state, which helped give TNA a face to those unfamiliar with or new to the organization.

For Adkins, retirement has been anything but slow. At 70 years young, she's finding new ways to give back to her church and community, spending time with her growing family and discovering new interests. The matriarch to four children, nine grandchildren and five great-grandchildren has been taking pottery classes and has converted her barn into a picturesque art studio situated on 20 wooded acres in rural Sumner County.

"I decided that with most of my family in other states, I wanted more time with them," Adkins said. "I wanted time to do all the things I haven't had time to do. This is where my heart is."