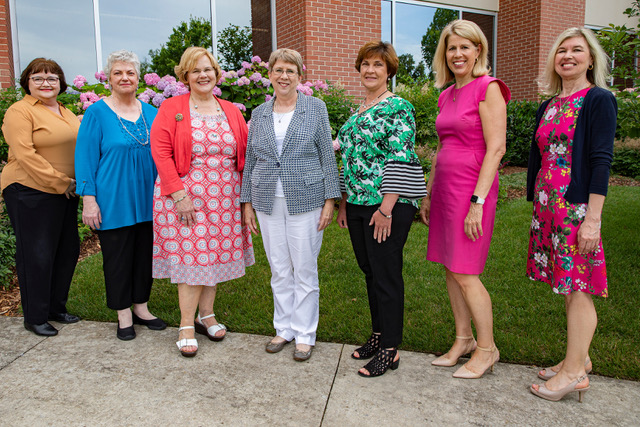 While the past seven decades of expansion and innovation helped make Ascend what it is today, the experiences these individuals share paint a nuanced historical picture of the evolution of the credit union. The biggest takeaway is how Ascend's organizational policies have contributed to impressive employee retention rates and a culture of building longevity and career advancement, especially among women in finance.

Employees interviewed and years of service include:

The credit union was founded July 12, 1951, at Arnold Engineering Development Center (AEDC) on Arnold Air Force Base. The first "branch" consisted of a desk in the corner of the Benefits Office of Arnold Research Organization, Inc., at AEDC. In 1976, the credit union expanded off the Base by opening a small office in Northgate Mall in Tullahoma. And in 1980, the Tullahoma and Manchester branches opened.

Today, Ascend is the largest credit union in Middle Tennessee, with more than $3 billion in assets, employs more than 600 people and serves more than 233,000 members at 28 branches. Ascend offers free access to more than 55,000 ATMs worldwide, as well as the credit union's own state-of-the-art video interactive teller machines (ITMs). In fact, Ascend was the first credit union in Tennessee to introduce ITMs in 2014. In addition, members can easily access loans and pay bills anytime via the internet, a mobile app or 24-hour call center. ITMs also make branch banking a breeze, offering convenient, extended hours from 7 a.m. to 7 p.m.

Ask the credit union's longest-serving employees what they would tell someone who's considering a career at Ascend, and you'll hear common themes of employee benefits, job stability, career advancement and life-long friendships.

"A diligent saving plan and a generous employer 401(k) match are going to enable me to retire early," Gilliland said. "Learn all you can and advance as positions become available that interest you."

"We have great benefits and opportunities to advance within the organization," Shields said. "I have made many lifelong friends - both members and co-workers - throughout my career for which I am very thankful."

"If you are looking for a stable work environment where you can plan and grow both personally and professionally, and if you enjoy helping others achieve a common goal, the credit union is the place to work and be part of an awesome team," Boyd said.

Stubblefield added, "While the national average of employment tenure in the U.S. is about four years, our employees have pushed us well above this mark with the tenure here at Ascend averaging 5 years 10 months."

"Developing our employees and offering room for advancement are some of the reasons that many of our employees have enjoyed such long and successful careers here at Ascend. This type of longevity and dedication isn't found everywhere and makes me proud of our team and their commitment," Gabriel said.

The Academy of Integrative Health and Medicine (AIHM) Interprofessional Fellowship in Integrative Health & Medicine, a 1000-hour hybrid program for clinicians who aim to become leaders in integrative health and medicine, has expanded its program and is accepting applications for October 2021.

Through the end of August, Connectus Health is offering physicals and immunizations with no out-of-pocket costs to prepare children and teens to return to fall classes.

Centerstone has announced the promotion of two clinicians to the executive leadership team for the organization's regional operations in Tennessee, Georgia and North Carolina.

The Nashville Health Care Council recently announced the appointment of the organization's 2021-22 board of directors, effective July 1. David Dill, president and CEO of LifePoint Health, has begun a two-year term as board chair.

In late June, Nashville-based Cumberland Pharmaceuticals Inc. released a series of case reports showcasing the effectiveness of Vibativ® (telavancin) in treating secondary bacterial infections in COVID-19 patients - particularly those with other significant health problems, such as obesity, diabetes and heart disease.

Shortage continues this summer due to increased demand for blood