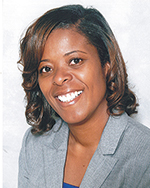 Beard, who has deep experience in public health, began working as an administrative assistant at the organization she now leads. Over the past decade, she has taken on increasingly responsible roles with the non-profit healthcare agency and was tapped as interim CEO in June 2014 with the position being made permanent the following year. An active researcher, she is project manager for the Community Networks Program Nashville site, which looks at cancer health disparities among African-Americans, and has served as an investigator and presenter on several other community-based research projects. Beard also sits on a number of advisory boards including the Meharry-Vanderbilt Alliance Community Advocates Advisory Council, the U-52 Cancer Coalition and the Sickle Cell Disease Center of Excellence Advisory Board. Beard earned her undergraduate degree in healthcare administration and planning from Tennessee State University and her master's degree in public health from Meharry. The Tennessee Primary Care Association honored her in 2015 for leadership excellence.