Being Responsive to First Responders 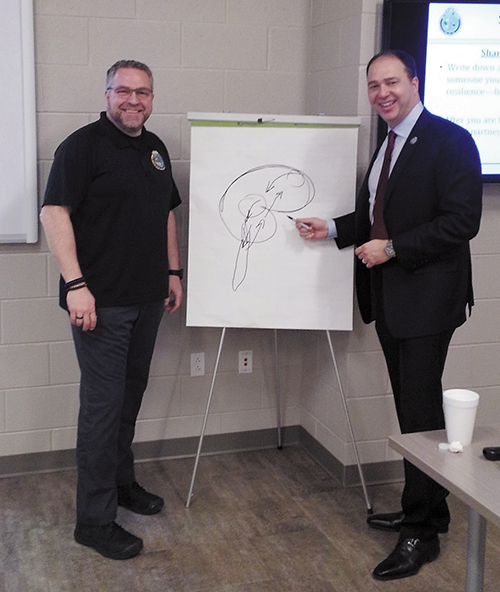 Program Focuses on Resiliency in the Face of Trauma

"Firemen, policemen, and EMTs - they all unfortunately experience more trauma in a month than most people do in their life," said Michael Genovese, MD, JD, chief medical officer of Acadia Healthcare. "Many first responders are part of a culture where historically you didn't talk about this stuff ... you 'suck it up' and move on," he continued.

However, humans cannot 'unsee' what they have already witnessed, noted the behavioral health specialist who also serves as medical director of the Officer Safety and Wellness Committee of the FBI National Academy Associates (FBINAA). "Last year, 2018, was the third year in a row that more officers died by suicide than in the line of duty," said Genovese.

Research has established repeated trauma actually causes injury to the brain. "Your neuropathways are shaped in part by your environment and your experiences. Your brain gets trained to think in the context of your experiences. It's a normal reaction to an abnormal stress," Genovese explained of the lasting changes that can occur to the amygdala, hippocampus and prefrontal cortex.

Yet, he continued, research out of the University of Pennsylvania and several other sites has also shown the protective properties of resiliency. "People who had more resilience were not as negatively impacted by adverse events," he said, adding those with higher resiliency were more likely to bounce back faster and to have post-traumatic growth instead of post-traumatic stress injury (PTSI).

Recognizing it isn't possible to change the nature of first responders' jobs, Genovese said the hope is to lessen the impact of trauma by improving the response to it. The Comprehensive Officer Resilience Train-the-Trainer Program in partnership with the FBINAA was born out of this desire to provide first responders with tools to address their continued proximity to trauma and to help colleagues and supervisors recognize warning signs of PTSI.

"I see this as engaging in preventive medicine," said Genovese. "We're trying to effectuate change."

Genovese said it's important to acknowledge a post-traumatic stress is an injury, not a weakness. During the trainings, he discusses the biology of trauma to underscore that message. It's also vital to build resiliency by giving responders the tools to effectively address the pressure and trauma that comes with the job in order to prevent injury.

But if injury does occur, first responders should be allowed and encouraged to seek assistance. "If you had chest pain, you'd go to the cardiologist. If you broke a leg, you'd go to the orthopaedist. If you have an injury to your brain, you should be just as open to going to get treatment for that," Genovese stated. "The earlier you intervene, the better your chances for full recovery," he added.

Asking for help, however, requires culture change ... both among those in need of help and their supervisors. Fear exists that seeking treatment could cost a career. Although it is a legitimate concern, the training program teaches participants it is possible to heal from PTSI and continue to be highly effective in the field. Through the trainings, Genovese has encouraged supervisors to create a formalized pathway back to service so that individuals aren't punished for trying to improve their mental health.

Warning signs that a first responder might need help include changes in mood, sleep, energy or appetite, and/or withdrawal from social situations and peers. Genovese added most people are not going to say they are depressed or anxious, but they might mention a recurrent, unwanted memory or exhibit a heightened startle response or become more negative in thinking or mood. An individual struggling ... possibly without realizing it ... might have nightmares and flashbacks of particularly traumatic situations and begin avoiding triggers that serve as a reminder of the event. "Your world gets smaller and smaller," Genovese noted.

While it could be one incident that triggers PTSI, Genovese said it's more often the result of cumulative trauma built up over time. "It's almost like you're filling up a bottle of water; and at some point, it begins to overflow," he explained.

A recent three-day training was held in Martin, Tenn., and brought together first responder representatives from across the state. "When we do the train-the-trainer model, the reach is exponential," Genovese said of creating the pathway for participants to return to their communities and share the lessons learned. "The Tennessee group was fantastic. They were passionate about it, and they were engaged." With completion of last month's training, nearly 300 first responders have now attended the program nationwide.

"People frequently ask me why I'm so invested with first responders. Every generation has a sentinel moment. For me, it was 9/11," explained Genovese. Growing up in New York, he said he had many friends in the Twin Towers on Sept. 11, 2001. "Of those who made it out, I was struck by them saying, 'As we were running down the stairs to escape, the police and firemen were running up the stairs into the path of danger.'"

With that image in mind, Genovese said a variance on a quote from President John F. Kennedy, itself a paraphrase of a Bible verse, has become a driver for his work with first responders. "To those from whom much is expected, much should be given," he said of supporting all who put themselves on the front lines of trauma and tragedy. "If we're going to expect that from them, we darn well better provide them the best medical care possible."