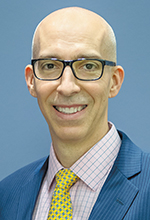 Centerstone has announced the promotion of two clinicians to the executive leadership team for the organization's regional operations in Tennessee, Georgia and North Carolina. Centerstone Military Services also announced a new chief executive officer to lead that division.

Matt Hardy, PsyD, has been named chief operating officer. Previously a regional vice president, Hardy joined Centerstone in 2000 as a therapist, specializing in the treatment of adolescents and adults with severe and persistent mental illness. Hardy received his doctorate in psychology from Wheaton College and is a licensed clinical psychologist. Additionally, he is a critical incident responder and also helped launch three Steven A. Cohen Military Family Clinics at Centerstone.

Brad Nunn, PhD, has been promoted to chief clinical quality officer. Previously vice president of quality improvement, Nunn joined Centerstone in 1987 and has helped establish both research and data analytics functions at the organization. Nunn received his doctorate in clinical psychology from Auburn University and has been a licensed clinical psychologist in Tennessee since 1988.

Blas Villalobos, DSW, a veteran of the U.S. Marine Corps, comes to Centerstone with more than a decade of specialized experience working with veterans and the military community, most recently serving as the director of Veterans Affairs for Chapman University in Orange, Calif. Villalobos holds doctorate and master's degrees in social work from the University of Southern California, as well as a bachelor's degree in psychology from California State University - Long Beach.

Hospitalized patients with COVID-19 who received the rheumatoid arthritis drug baricitinib, in combination with the standard of care including corticosteroids, died less often than those receiving only the standard of care, according to a study released this week in The Lancet Respiratory Medicine.

The Tennessee Justice Center applauds USDA for its reevaluation and cost adjustment of the Thrifty Food Plan, a measure that is used to calculate the monthly Supplemental Nutrition Assistance Program (SNAP) benefit allotment.

Gen Cap America, Inc. ("Gen Cap"), a private equity firm focused on lower middle market buyouts, announced that, in partnership with management, it has acquired Lab Products, LLC and Harford Systems, LLC (together, "Lab Products") from Avidity Science, LLC. Terms of the transaction were not disclosed.

In collaboration with Blakeford Senior Life, Ben Oddo is releasing a podcast series this Thursday, September 2, titled Me and All My Friends.