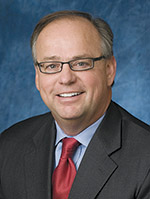 Cleckner joined Saint Thomas Health in the role of COO in August 2016. Previously, he was at LifePoint Health where he served as vice president of operations for the Eastern Group, overseeing operations for seven hospitals. Cleckner also served in executive roles for Standard and Poor's, Deloitte and Touche, Emdeon, North Highland, and Investment Scorecard where he was president and COO. He received his undergraduate degree from Trevecca Nazarene University and his law degree from the University of Tennessee College of Law.