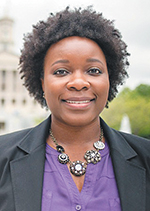 In March, the Tennessee Justice Center filed a class action lawsuit on behalf of 35 children and adults who they believe were wrongfully terminated from the state's Medicaid program. However, they also filed a motion for a preliminary injunction asking the court to reinstate coverage for 178,000 children and adults who had been terminated in the year before the March filing.

Kinika Young, senior director of health policy and advocacy at TJC, said it could be days ... or months ... until the court rules on motions for class certification and a preliminary injunction, as well as the state's motion to dismiss the original case. "We are just beginning discovery, although it is limited pending disposition of the state's motion to dismiss," said Young.

She added TJC's intention was to ask the court to enjoin the state from cutting people from TennCare until systems problems at the root of many of the issues were fixed. " Fortunately, Congress adopted a provision in its first coronavirus relief package that pays the states more if they suspend terminations during the pandemic," Young continued, adding Tennessee has stopped terminations to qualify for the extra funding.

Anna Morad, MD, president of the Tennessee Chapter of the American Academy of Pediatrics, said the organization met with TennCare officials to discuss disenrollment and found the conversation to be positive overall. "I think it's so complicated, because so many different factors went into those numbers," said Morad. "Our take-home is we need to be proactive and mindful about what people need when they're trying to comply with governmental applications and reenrollment." She added that means having enrollment materials available in multiple languages, letting patients know if they're eligible for Pandemic EBT, and how to apply for resources.

Pandemic-related job losses are creating even more need for awareness, and Morad encouraged pediatricians to get involved by providing the TennCare phone number to patients and directing them to the website. "We need to make sure children coming off commercial payers are picked up, that they don't lose coverage, and that families understand how to access coverage," she said. "Responsibility falls to every single agency that has the ability to help. We've got to operate as a community. We've got to help each other."

All cancers are not created equally. Recent Vanderbilt research show stomach, lung and appendiceal cancers are on the rise and detected later among certain ethnic groups.

Efforts are underway by TDMHSAS leadership to reach more Tennesseans suffering with addiction through education and recovery initiatives.

AMA Backs Policy Proposals to Cover More of the Uninsured

CHICAGO -- The American Medical Association (AMA) House of Delegates adopted principles today supporting public policy approaches that have the potential to expand insurance coverage to millions of the uninsured, including those who have lost their coverage during the COVID-19 pandemic.

Statins to be Studied for Prevention of Dementia, Disability, and Heart Disease

Opioid misuse often traces its roots to medically valid pain management intervention. Increased awareness of addiction has led providers to look for effective alternatives. In the hospital setting, recent studies find Caldolor® might be one such option.

This year marks the 25th anniversary of the Nashville Health Care Council, an organization that was founded by the local health care community with the purpose of establishing Nashville as the nation's health care capital.

The five-day policy-making meeting of the American Medical Association concluded business yesterday after virtually gathering physicians and medical students from all corners of the nation to shape the AMA's health care agenda.