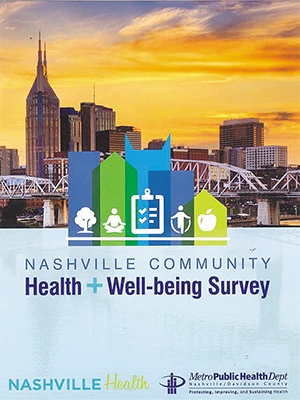 You can't effectively manage what you don't measure.

Using this truism as a launching point, the Metro Public Health Department and NashvilleHealth set out to capture data that would bring Davidson County's health profile into clearer focus. At the end of September, the two organizations released results from the Nashville Community Health + Well-being Survey, the first countywide health assessment conducted in nearly two decades.

"NashvilleHealth and the Metro Public Health Department have worked in partnership for over a year to provide the Nashville community with critical and timely data on the of health of residents - data that can help organizations, governments and businesses make informed decisions, effectively direct resources and track progress in improving the health and well-being of Davidson County residents," said Caroline Young, executive director of NashvilleHealth.

The survey, which was available in English and Spanish, was mailed to 12,000 homes covering different areas of the county to elicit response from participants across age groups, education levels, race/ethnicity, income levels and gender. The response rate was approximately 15 percent with just over 1,800 respondents aged 18 and over answering the questions online or by returning the mailed paper questionnaire.

While there certainly were some bright spots, the data underscored the role social determinants play in health and well-being and highlighted inequities and areas that need improvement before all Nashvillians have the opportunity to optimize physical, social and emotional health.

Despite the exciting news, she pointed out the survey also highlighted groups where insurance and regular care weren't as widely accessible. "The Hispanic/Latino community and the LGB community are less likely to be insured," she explained. "Knowing this helps NashvilleHealth and other organizations better allocate resources and target programs to address this disparity." Another concern, said Young, is that even with the high rates of insurance coverage, "more than one in five Nashvillians indicated they currently have healthcare bills that are being paid off over time."

While Tennessee continually ranks higher than the national average when it comes to smoking rates by adults - 22.6 percent for the state vs. 14 percent for the country according to the most recent CDC statistics - the survey found Davidson County beats both. Only 13.2 percent of Nashvillians report being current smokers, and 6.6 percent said they used e-cigarettes or vaping products.

Interestingly, however, Nashville's East Zone doubled the smoking rate with 26.3 percent of those respondents reporting being current smokers. Perhaps not surprisingly, that was also the geographic zone that was most likely to suffer from respiratory illnesses including COPD, emphysema, asthma and chronic bronchitis (26 percent). Another red flag underneath the overall good news was that vaping rates more than doubled when looking specifically at young adults ages 18 to 29.

"Fewer Nashvillians report using tobacco than expected. This is good news, but the survey also shows a rise in vaping among 18 to 29 year-olds. This tells us that there is still a problem with nicotine addiction in our community and that we should look for ways to target programming and dollars to address the disease," said Young.

Obesity continues to be a major challenge within the city. Based on self-reported weight and height, which was used to calculate Body Mass Index scores, two-thirds (63.6 percent) of Davidson County residents are categorized as obese or overweight. Unlike other health indicators within the survey, overweight and obesity was an issue across education and income levels.

However, racial disparities do exist with 78 percent of African American respondents and 73 percent of Hispanic/Latino respondents being classified as overweight or obese compared to 55 percent of White respondents. The Northwest Zone of Davidson County also had the highest prevalence of overweight and obesity with 72.5 percent of the area's residents falling into one of the two categories.

"The insights provided by the survey can better inform work already being done across the county and drive better decisions, alignment of resources, and creative new solutions," said Young. "For example, Nashvillians report eating only three servings of dark green vegetables and five servings of fruit during the week. The USDA's Dietary guidelines recommend 5-13 servings a day. This tells us we need to focus on helping residents incorporate fruits and vegetables into their diet." She added that by having these baseline data points, it will be easier going forward to measure the effectiveness of various interventions.

The survey also revealed a significant need to focus more on mental health in Davidson County. "We were not expecting that Nashvillians would report a greater number of poor mental health days per month than residents in our peer cities and the state overall," said Young.

Yet, residents reported having 5.3 poor mental health days involving stress, depression and emotional problems in a 30-day period. That rate outpaces the state average of 4.5 days and peer cities like Austin, Texas (3.3 days) and Charlotte, N.C. (3.4 days). The national average is 3.8 days.

Women self-reported 6.2 poor mental health days per month compared to 4.3 days for men, and more than 20 percent of Nashvillians indicated having been diagnosed with a depressive order. Currently, 15.5 percent of county residents report taking medicine or receiving treatment from a healthcare professional for a mental health and/or emotional condition.

"Our hope is that clinicians and researchers throughout our community will be able to take this data and drill further down on the possible causes and contributing factors," Young noted.

The Role of Social Determinants

Similarly, while 30.5 percent of Nashville adults have been diagnosed at some point with hypertension, that rate dips to 17.7 percent among those with a college degree. Conversely, the hypertension rate is 39.6 percent for those who didn't graduate from high school.

When it comes to opioid use, income and education are major factors, as well. Those in households earning less than $25,000 a year were 12 times more likely than those making $100,000 or more a year to use opioids not prescribed to them within the past year. Nashvillians with a college degree took opioids not prescribed to them at a rate of 3.8 percent compared to the 11.8 percent of those without a high school diploma taking unprescribed opioids.

"We are making the survey and its findings available to anyone who has interest in using it to better understand the health of Davidson County residents," said Young. "We have already received great feedback from local researchers on the richness of the data," she added. Young noted this is some of the first data of its kind looking at LGBT population health, which area researchers have been particularly interested in exploring it more deeply.

"For the first time in nearly 20 years, we have rich, timely data that is providing critical insights into the health and well-being of Nashvillians and will serve as a baseline by which we can measure future interventions and programs," Young continued. "Now, we need to put it to work ... and we need the medical and research community's help," she concluded.

Links to the full survey results and executive summary are available online at nashvillehealth.org.