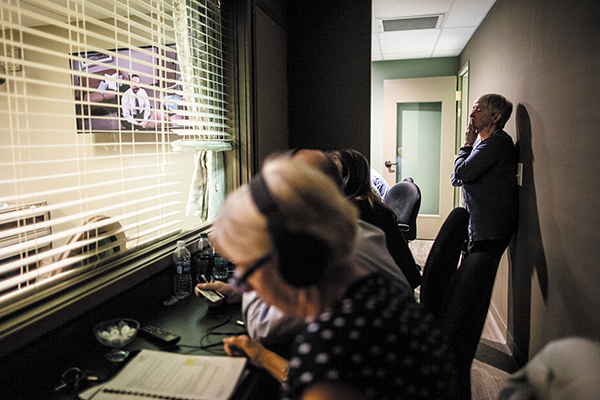 Simply getting the first words out is often the hardest part of initiating a difficult conversation. To help physicians and other providers gain hands-on, situational experience, Alive Hospice recently launched Alive SHARE. 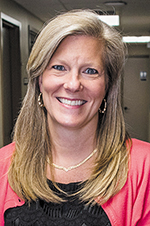 "It's provider training, but our name says it all," explained Alive President and CEO Anna-Gene O'Neal, RN, MSN, MBA. "It's Supporting our patients and families through Honesty, Autonomy, Reflection and Empathy."

Available for both individuals and groups, the program utilizes actors to explore the range of emotions and reactions to difficult news through scripted scenarios, which are tailored to meet participants' learning objectives. Typically there are four or more scenarios that build upon each other during the training session. Between each, trained facilitators break down what just occurred, looking at what worked well, what might be improved, and introducing new skills to use during the next scenario. Pilot participants have noted the reflection and introspection that are critical components of the training carry on long after the session ends.

Healthcare providers are trained to identify symptoms and initiate interventions. While critically important, O'Neal said it's equally necessary to remember the patient at the center.

Illustrating the point with a personal story, O'Neal shared a family friend had an aggressive brain tumor and already had begun experiencing the neurological and mental status changes that accompanied his diagnosis. When he wound up in renal failure, an ER resident notified his wife that the hospital would start dialysis, but the man's family said 'no,' recognizing the process would simply frighten and confuse him even more.

"The intervention for acute renal failure is dialysis, but where did that fit for this person?" asked O'Neal. She added the 'right' clinical intervention isn't always the best or only option. "How do we put the person back in the center of the decision-making?"

The way to do that, she continued, is by being honest with patients and family members. Instead of only offering one treatment path with the patient feeling like there is no other choice, the SHARE program helps providers lay out all options, including allowing the disease to take its natural trajectory with support and comfort interventions only. In order to make an informed decision, O'Neal continued, families and patients truly have to understand the benefit and burden of all options.

"Then let the patients make the decision that's best for them. It comes back to what's important in someone's life. How do they want to live? How do they define quality of life as an individual?" Those are questions, O'Neal pointed out, that providers can't answer.

"There are four components of medical ethics - there's beneficence, non-maleficence, autonomy and justice," she continued. There are times when the first two - doing good and doing no harm - actually are in opposition. "When benefit and burden collide, who is best to make that decision?" questioned O'Neal. "When that occurs, autonomy has to take over, and autonomy is from the patient's end."

Alive SHARE was created in recognition of how difficult these conversations are for most people. "You're going to have to deal with your uncomfortable component ... and we can help you with that ... but you can't not be open and honest and direct - and you can also do that while being compassionate and empathetic and understanding and succinct."

She added that culturally, as a clinical society, it's important to look at pain differently and recognize that pain can be emotional or spiritual in addition to being physical. Broadening the definition opens new options to treating 'pain' in the way that's most important to the individual at the center.

For those participating in the training at Alive's Nashville office, a specially equipped simulation lab has been created that replicates a bedroom with actors portraying the patient and family members. The room includes cameras and microphones to pick up the interaction. Just behind the bedroom, out of sight of participants, is a control room where facilitators observe each scene. The audiovisual system allows participants and facilitators to review and discuss each scenario to enhance the experience through reflective learning and skill-building.

In addition to introducing a set of communication skills not typically taught during medical training, O'Neal said the program has identified system process issues - particularly among group trainings when various participants are unsure of what their role should be in the conversation.

Often physicians opt to undergo the training, which takes several hours, on their own. O'Neal said it's important not to worry about peer opinion during the process. "It's a safe zone," she noted, adding that if a participant does a great job ... then great. However, she continued, "If they do an awful job, it's okay to fail because it doesn't go outside of these walls - and that's the whole point. If you're going to struggle, struggle here ... don't struggle with the patient and family."

While the simulation lab is specially equipped for the SHARE training, the program is also portable. Trainings have been conducted at a number of facilities in Middle Tennessee and beyond as it rolls out nationally. Alive has trademarked the program, which includes copyrighted materials, and hosts 'train-the-trainer' sessions for organizations that wish to license the program to use throughout their system. O'Neal said the SHARE program has taken communications models outside the healthcare industry and merged those concepts with empathic training found in healthcare to create a unique approach.

Whether the trainings are conducted onsite or in the field, she noted the objective remains the same. "The goal is that everyone is successful. Everyone is going to leave here with a higher level of skill than when they came in," O'Neal said. "To see confidence come out is really important."

Those interested in learning more about the program can go online to alivehospice.org and click on the 'For Healthcare Professionals' tab or call the main office at 615.327.1085.