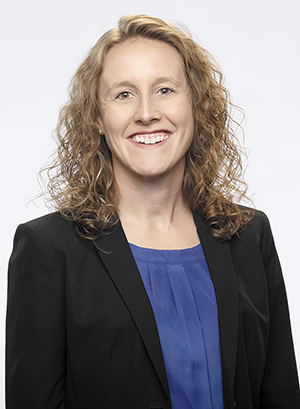 It's a long way from rural Iowa to Nashville, but Meredith McKean, MD, MPH, has navigated it well, with a few stops in between. In June, McKean was named among the newest research faculty members at Sarah Cannon Research Institute at Tennessee Oncology, where she oversees Sarah Cannon's growing Melanoma Research Program. In her role, McKean investigates innovative therapies in clinical trials, caring for patients facing melanoma.

"I always loved science growing up and was interested in natural science since that's what I was exposed to growing up on a farm," McKean said. A middle school genetics camp at the University of Iowa solidified that passion and served as her first exposure to the science behind cancer and inheritable diseases.

"Looking back at my essays for scholarships, I always said I wanted to cure cancer," she noted. "I thought I'd do it in a lab, but then I recognized the opportunity as a physician to be able to develop clinical trials for patients and to be able to care for them. It was an evolution that occurred through my training."

McKean received her bachelor's degree from Iowa State University, where the promising athlete ran cross-country and track. She continued her education at the University of Iowa, earning her medical degree along with a Master's of Public Health. During medical school, McKean's research in the heart failure and heart transplant program focused on building a tissue bank and analyzing tissue for proteins predictive of patient survival.

"My background gave me a good understanding of how to set up clinical trials and evaluate samples from patients and to try to predict who will respond," she said. "I learned to look for early signals of resistance to treatment, and that's helpful as a clinical trials investigator."

While studying various tumor types at MD Anderson, McKean found her time in melanoma research to be the most meaningful. "It's exciting that over the last several years there have been newer agents developed - targeted therapies and immune checkpoint inhibitors - with additional therapies continuing to be investigated," she said. "I saw how important it would be to say ahead of time who will respond to immunotherapy and who won't. That's the next big challenge in melanoma, as in a lot of tumors: Whose immune system needs additional treatment to recognize and attack cancer?"

At Sarah Cannon, McKean and her team focus on identifying genetic drivers of each person's individual cancer through a personalized medicine approach. She said Sarah Cannon's Melanoma Program continues to develop, and she appreciates the organization's enthusiasm for growing the clinical trial offering for patients. Sarah Cannon currently offers melanoma trials for phases 1 to 3, with plans to open up more opportunities for patients.

"Melanoma was the first tumor that immune checkpoint inhibitors were approved in, so it's really a breeding ground for understanding what other treatments we need to add to immunotherapy to make cancers respond to treatment," McKean explained. "Sarah Cannon is well poised to advance the field of melanoma treatment in a significant way."

Prior to approval of immune checkpoint inhibitors in 2011, the five-year survival rate for stage 4 metastatic melanoma was less than 15 percent. Thanks to ICI and targeted therapies, today's five-year prognosis is closer to 30-40 percent. "There have been significant strides, but we need to find options for patients who aren't responding to initial therapies," McKean said. She also believes primary care providers and dermatologists play an important role in catching cancer in its earlier, more treatable stage, and urges providers to educate patients about spots that are changing color, bleeding or irritated.

McKean is now working with investigators nationwide, and plans to open more melanoma trials throughout the Sarah Cannon network. "When I was looking for a position after my fellowship, I was looking at academically centered programs, and what was appealing about Sarah Cannon was the mission," she said. "I'm from rural Iowa, so I loved that the goal was to take these trials out to patients in the community setting. Our network is a team full of great oncologists who are providing treatment in their communities. The patients really are put first, and it feels like a family."