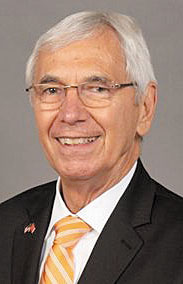 Clarksville physician Thomas Ely, DO, FACOFP, FAAFP, has been named president-elect of the American Osteopathic Association. He will lead the national organization as 2020-21 president. Ely has been on the AOA Board of Trustees for the past 13 years and is a past president of the Tennessee Osteopathic Medical Association and also served on Tennessee's osteopathic medical licensing board for nine years.

Ely graduated from what is now the Kansas City University of Medicine and Biosciences College of Osteopathic Medicine in Missouri. A commissioned officer in the U.S. Army Medical Corps., he completed a family medicine internship and residency at DeWitt Army Community Hospital in Fort Belvoir, Va. After retiring from the Army in 1988 as a lieutenant colonel, Ely went into private practice in Clarksville and spent a 13-year stint as chief medical officer for Gateway Medical Center.

Tennessee Oncology, one of the largest providers of oncology care in the country, announced that Stephen Schleicher, MD, MBA has been appointed Chief Medical Officer (CMO) effective January 1, 2022.

A potential first-of-its-kind drug to treat the symptoms of Rett syndrome received positive top-line results from a phase 3 trial sponsored by Acadia Pharmaceuticals Inc. and led by investigators from Vanderbilt University Medical Center to evaluate efficacy and safety.

Vanderbilt Kennedy Center (VKC) researchers, as part of the Centers for Disease Control and Prevention (CDC) Autism and Developmental Disabilities Monitoring (ADDM) network, report an increase in the number of children in Tennessee with autism spectrum disorder (ASD).

Ascend Federal Credit Union announced it has donated $10,000 to the Tennessee Chapter of the Leukemia & Lymphoma Society (LLS) to support Light the Night.

Gene Discoveries Give New Hope to People Who Stutter

More than 2.5 million Americans have a chronic condition arising in early childhood that can negatively impact their education, job performance and employability well into adulthood.

Community Leaders Join Board of Middle Tennessee's Only Nonprofit Hospice

Bone and Joint Institute of Tennessee announced the opening of an orthopaedic urgent care and rehabilitation facility in Brentwood, located in Marketplace at Maryland Farms at 101 Creekside Crossing, Suite 1100.