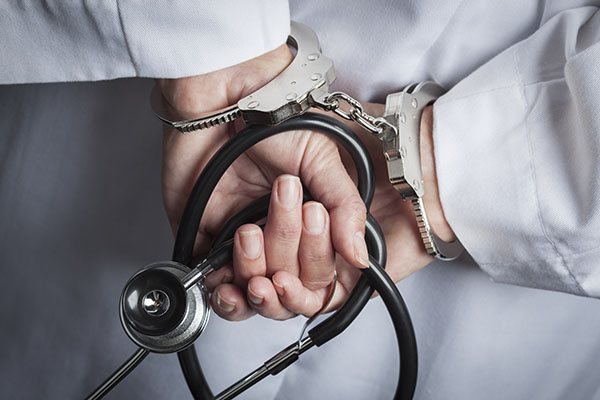 On Wednesday, April 17, Attorney General William Barr announced federal agents with the Appalachian Regional Prescription Opioid (ARPO) Strike Force have charged 60 individuals, including 53 medical professionals across 11 states, for their alleged participation in illegal prescribing and distributing of opioids and other dangerous narcotics and for healthcare fraud schemes. Several individuals in Tennessee have been charged as part of the enforcement operation. Additionally, HHS Secretary Alex Azar announced that since June 2018, more than 2,000 individuals have been excluded from participation in Medicare, Medicaid and all other Federal health care programs, which includes more than 650 providers excluded for conduct related to opioid diversion and abuse.

"Reducing the illicit supply of opioids is a crucial element of President Trump's plan to end this public health crisis," said Azar. "It is also vital that Americans struggling with addiction have access to treatment and that patients who need pain treatment do not see their care disrupted, which is why federal and local public health authorities have coordinated to ensure these needs are met in the wake of this enforcement operation. The Trump Administration's law enforcement and public health leaders will continue to work hand in hand to end this crisis that has hit Appalachia hard and steals far too many lives across America every day."

According to the DOJ announcement, the charges announced today involve individuals contributing to the opioid epidemic, with a particular focus on medical professionals involved in the unlawful distribution of opioids and other prescription narcotics, a priority for the Department.

"Today's takedown demonstrates the FBI's unwavering commitment to working alongside our Strike Force partners, including the HHS-OIG and DEA, to fight the opioid epidemic and related criminal activity in the Appalachian region," said FBI Executive Assistant Director Hess. "We will not stand by and allow the harmful and oftentimes deadly practice of over-prescribing highly addictive drugs to continue unchecked. The FBI will pursue medical personnel who misuse their positions of trust to blatantly disregard others' very lives for their own financial gain."

In the Middle District of Tennessee, federal indictments were unsealed today charging nine Middle Tennessee medical professionals, including four doctors, four nurse practitioners and a pharmacist, with various charges alleging their participation in illegally prescribing and dispensing opioids and other dangerous narcotics and health care fraud schemes. Two cases involve doctors who were previously sanctioned by the Tennessee Medical Board in connection with the overprescribing of opioids, one of whom was sanctioned for providing prescriptions to vulnerable patients, while the other allegedly prescribed opioid pills after serving a Board imposed term of probation. Another case alleges that a doctor prescribed opioids and other controlled substances to at least four individuals. In another case, an advanced practice registered nurse at a pain management clinic allegedly wrote prescriptions for opioids that had no legitimate medical purpose and that were outside the usual course of professional practice. Separately, a pharmacist was charged for allegedly dispensing large amounts of opioids outside the usual scope of professional practice and for no legitimate medical purpose. Finally, a podiatrist was charged with unlawful distribution of controlled substances. In addition to assistance provided by the FBI, DEA, and HHS-OIG, these cases were brought in connection with assistance from the Tennessee Bureau of Investigation, Medicaid Fraud Control Unit; the 18th Judicial District Drug Task Force; the Sumner County District Attorney's Office; and the District Attorney General for the 22nd Judicial District.

In the Eastern District of Tennessee, at total of eight individuals, including five doctors, a nurse practitioner, a physician's assistant, and an office manager were charged in four cases. Four doctors, a nurse practitioner and a physician's assistant were charged with the unlawful distribution of opioids. Two doctors were charged with health care fraud violations. Three of these cases are related to alleged pill mill operations in the Eastern District of Tennessee. In addition to assistance provided by the FBI, DEA, and HHS-OIG, these cases were brought in connection with assistance from the Tennessee Bureau of Investigation, Medicaid Fraud Control Unit.

In response to federal arrests of medical professionals in Tennessee and other nearby states through the ARPO Strike Force Takedown, the Departments of Health and Mental Health and Substance Abuse Services (TDMHSAS) and the Division of TennCare have activated community-based substance abuse resources and statewide call lines to serve affected patients.

TDMHSAS community-based partners in affected areas include Community Anti-Drug Coalitions, Regional Overdose Prevention Specialists (ROPS), and Lifeline Peer Project team members. They are working to notify first responders and other critical contacts of possible impacts of the clinic closures. ROPS are also interfacing with affected patients through informational flyers and through community trainings and naloxone distribution.

State leaders are also preparing for additional calls and sharing information and updates with calltakers at statewide phone lines that may receive additional calls due to the clinic closures. The impacted 24/7 hotlines include:

"In support of patients affected by these recent actions, we are contacting local medical providers, pharmacies, and emergency departments to discuss potential patient impact and to encourage a swift community response. The Department of Health will continue to closely partner with our fellow state agencies, to protect the health and safety of Tennesseans during this critical time," said Tennessee Health Commissioner Lisa Piercey, MD, MBA, FAAP.

"With a situation like this, the fear is that an interruption in opioid pain medication may cause patients to experience some symptoms of withdrawal, and that can lead to increased risk-taking. For people who want to seek treatment for any kind of addiction issue, call the Tennessee REDLINE (800-889-9789) which can help with referrals to substance abuse treatment resources," said Department of Mental Health and Substance Abuse Services Commissioner Marie Williams, LCSW.