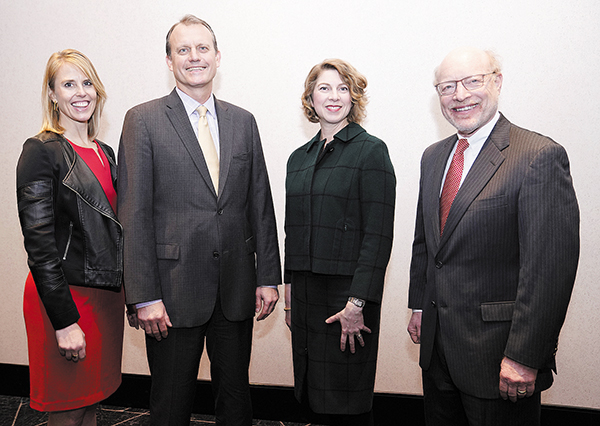 At the end of February, the Nashville Health Care Council hosted a lively discussion on healthcare policy with the leaders of two of the most influential industry advocacy groups in Washington, D.C.

Buntin led off the discussion by asking about the Medicare-for-All movement and recent legislation by House Democrats to cover all Americans through the federal healthcare program. Both Eyles and Kahn said the bill is mostly symbolic with little chance of passing in the near term, but both also agreed the proposal should be taken seriously.

"It could fundamentally change the economic landscape of this city and many other parts of the country," said Eyles. While there has been some backing off of the idea of getting rid of all insurance, Eyles said it's important to take the frustrations seriously and come up with a better way forward to improve access to care. "People want to fix what's broken. They don't want to start all over," he said.

"That bill being introduced is a tremendous disappointment to me," said Kahn, noting the Affordable Care Act could have provided coverage for all.

In 2018, Kahn formed the Partnership for America's Health Care Future, of which AHIP is a participant, in hopes of bringing the industry together under a unified voice in opposition for Medicare for All. "Once President Trump was elected and Bernie Sanders continued to tout Medicare for All, I thought that we in the industry really needed to take the momentum for it seriously," said Kahn. "We are for having everyone covered," he continued, but added the industry needed to have cohesive counter-messaging around why Medicare for All isn't the solution. "I think at the end of the day, if the industry is united, it will make a difference in whether the legislation goes forward."

Buntin also asked about the recent Congressional hearing where seven pharmaceutical executives were called to D.C. to discuss drug pricing and affordability. Eyles, who used to work in the pharmaceutical industry, pointed out the CEOs who testified "said nothing about how they're going to lower prices." He continued, "Manufacturers completely control the list price of drugs. They decide if they want to go higher than what's on the market, or if they want to go lower. Blaming PBMs for rebates is really a deflection."

In addition to addressing the "gaming of pharma prices," Eyles said he would also like to see increased transparency about how pricing is set. When there are multiple drugs for a disease or condition, Eyles said the marketplace does work. "The problem is when there is no competition, no other option," he continued, adding there is a need for more biosimilars.

The panelists agreed the move toward value-based care will continue, consideration of social determinants of health will take on increasing importance, industry workforce issues need to be addressed, and the hot topic of "surprise bills," which is a bipartisan concern, will garner increased attention. However, one major area of disagreement came when the discussion shifted towards consolidation within the industry, particularly hospital consolidation.

"The consolidation on the insurance side is integration happening along the entire continuum of care, or vertical integration," said Eyles. "This will lead to better outcomes at a lower cost. However, with straight up horizontal consolidation, like what you see on the provider side, it's more about market power."

Kahn countered that the consolidation happening on the provider side, particularly with hospitals, is an inevitability of the changing healthcare landscape. "I think all the noted economists, insurance CEOs and policymakers who complain about hospital consolidation live in a total fantasy world," said Kahn. "The traditional hospital model is fundamentally changing. Inpatient revenue is no longer able to support many hospital systems because so much care is no longer being provided on an inpatient basis." He added, "It's unrealistic to think we're going to have free-standing hospitals competing with each other. The institution is unsustainable."

Back in agreement mode, both panelists expressed concern over access to care in rural communities. Kahn said he worried about whether or not healthcare would continue to be there for rural communities in the way they expect. Eyles noted a few short-term options are in play to help alleviate some immediate issues but added long-term solutions are needed to address the problems, such as provider shortages and the changing delivery model, that disproportionately impact rural healthcare.

"Rural hospitals have high populations of Medicare and Medicaid patients," noted Kahn. "They just can't make it only on the federal mix," he said of reimbursement woes. Kahn opined proponents of Medicare for All should look at rural hospitals as a leading indicator of why a single payer model isn't viable.

As the discussion drew to a close, Buntin asked the panelists if Nashville has a role to play when it comes to impacting policy on the federal level.

"Nashville is absolutely a hub of disruption, innovation and change we want to see within the healthcare system," said Eyles. "As an industry, Nashville's healthcare leaders need to engage with their respective trade associations, as well as their Congressional leaders to help move policy forward."