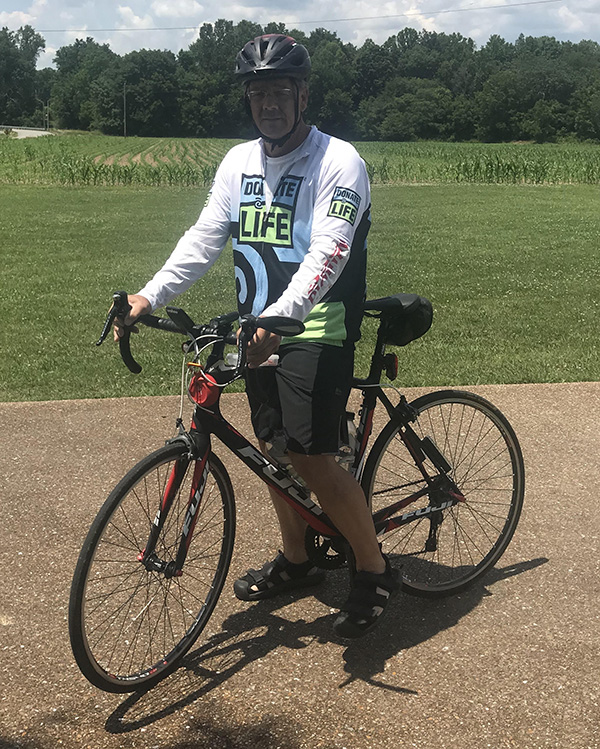 56-year-old Robert Marcom bikes 20 to 30 miles on a typical weekday morning. On weekends, 70-mile rides are pretty normal accomplishments for Robert. The lifelong Manchester, Tennessee, resident is modest when he talks about his hobby. Still, Robert's story is far from ordinary. For starters, he's biking on a borrowed heart.

In spring 2016, Robert and his wife Tammy were packing up for a road trip when Robert felt an unusual pressure in his chest. Tammy called a nurse friend, who advised her to dial 9-1-1 right away. After a brief stop at a local hospital to wait out some unexpected bad weather, the ambulance rushed Robert to Ascension Saint Thomas West. He arrived in medical shock with life-threateningly low blood pressure. He was placed on extracorporeal life support and was mostly unconscious over the next few weeks. Robert does remember spending his 52nd birthday at West; his care team blew finger gloves into "birthday balloons" to cheer him up.

The day after his birthday, Robert's doctors implanted an LVAD (Left Ventricular Assist Device) to support his left ventricle in the crucial act of pumping blood to the rest of his body. A total of 82 days would pass before Robert was strong enough to return home to Manchester. He still recalls how nice it felt to sink into his easy chair and how delicious his first slice of pizza was after weeks on a feeding tube.

In summer 2017, Robert got the call that a heart was available and his transplant was performed by Dr. Ashok Babu of Ascension Saint Thomas. In recovery, Robert decided that he would do whatever it took to put his gifted heart to good use. His feet bothered him when he walked long distances, so he decided to research biking and ultimately purchased a Fuji bike. He started slow, but made quick progress with the help of a band of local bikers ranging in age from 35 to 72. Robert threw himself into Manchester's biking community and, over the years, the group has become his biggest support system.

Right now, he and some of his biker friends are training for this fall's "Hike to Jack and Back," an annual race presented by Jack Daniel's in support of the National Multiple Sclerosis Society. Round-trip, it's a 120-mile ride that takes place over two days. Robert says that he's hoping he'll run into Dr. Don Chomsky, a member of his Ascension Saint Thomas care team and an avid cyclist who has previously participated in "Bike to Jack and Back."

"The people I ride with tell me that I inspire them," says Robert. "I hope that my story can motivate someone to get out there and get moving."

AHA TO CONGRESS: DON'T USE PRF FUNDS FOR INFRASTRUCTURE, PROVIDERS NEED THEM NOW

UnitedHealthcare Donates $300,000 to Nonprofits in Tennessee

Funding is part of UnitedHealthcare's $11.4 million in Empowering Health grants focused on expanding access to care and addressing the social determinants of health for people in underserved communities

Tennesseans Have Until Aug. 15 to Sign Up at HealthCare.Gov and Can Save $83 per Month

Data shows 41,683 Tennesseans signed up for health coverage during the 2021 Special Enrollment Period and 621,800 Tennesseans are eligible for the American Rescue Plan's savings.

Four-story, $95.4-million dollar expansion largest since hospital was built in 2010

American Oncology Network, LLC (AON), an alliance of physicians and healthcare leaders working together to ensure the long-term success of community oncology, announced a partnership with CarePayment, a company specializing in enabling patients to pay for their healthcare with a 0.00% APR solution.

The Vanderbilt Transplant Center performed a record number of solid organ transplants in fiscal year 2021 (FY 21) -- 637 life-saving procedures among its adult and pediatric programs -- despite occurring entirely during the COVID-19 pandemic.

Covenant partners with Marietta Eye Clinic, an ophthalmology-based practice with locations across the northwest suburbs of Atlanta

BRC Healthcare announced the expansion of their addiction treatment portfolio with the acquisition of four substance abuse treatment facilities in Nashville:

The Nashville Health Care Council announces the appointment of its 2021-2022 board of directors, effective July 1.David Dill, president and CEO of LifePoint Health, will begin a two-year term as chairman of the board.

BlueCross BlueShield of Tennessee recently announced the promotion of two current leaders to senior management roles within the company.

Columbia will be the next Walls for Women city

Columbia joins eight other Tennessee cities on the new Walls for Women Trail that celebrates women's suffrage through art and creative expression.

Oman-Gibson Associates (OGA), a full-service health care real estate firm based in Nashville, is opening a Dallas-Fort Worth office.