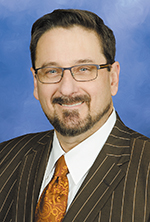 Morgan Lorio, MD, is changing the future of spinal surgery.

The Hughston Clinic Orthopaedics' spine, orthopaedic and hand surgeon recently sold 22 patents to Germany's Emerging Implant Technology. Expected to hit the market in 2018, Lorio's living hinge design for spinal cages is positioned to improve outcomes for spinal surgeons, health systems and patients ... and it couldn't have come at a better time.

"The spine industry has seen diminishing margins as hospitals pressure to decrease costs and maintain their own margins," Lorio said. "There's been less innovation in spinal surgery over the past few years, in part because the money for research and development has dissipated."

The push to reduce healthcare costs, coupled with the movement toward patient-centered medicine, has opened the door for 3D printing technology. Unlike their traditional counterparts, 3D surgical implants eliminate costs associated with assembly.

"3D printers have become ubiquitous, like copy machines," Lorio said. "My patents are an effort to circumvent the technical issues I've encountered surgically implanting devices into a patient's spine where less pressure or retraction is desired when mobilizing neurological elements and other soft tissues," he explained. "These expandable cages can be delivered through a smaller working corridor and still deliver a large footprint once deployed."

Lorio's living hinge cages are placed into the intra-discal space between spinal vertebrae to provide structural support to the spine. "When using traditional implants, it's difficult not to harm the adjacent soft tissues," said Lorio, whose design was inspired by the corrugated partitions found in cardboard boxes. "Living hinge cages provide more functional ease for the surgeon and provide a better outcome for patients."

For Lorio, it's Personal

The quest for better patient outcomes is personal for Lorio. As a pre-medical student in 1982, Lorio was working a part-time construction job when he fell 35 feet, sustaining a number of injuries including a broken back and split pancreas. The fall also resulted in transient paralysis.

"Living with a spinal injury taught me to really examine and listen to patients," said Lorio, whose experience motivated him to pursue orthopaedics. "The things I encountered made me a better listener, and I realized I'd have to stay on top of spinal research if I was going to take care of myself."

Lorio, who continues to act as a medical advisor for his patented technology, said webinars would be scheduled to address application of the cages as they become available early 2018.