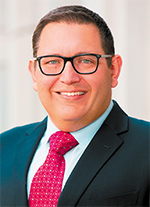 The BUILD Health Challenge was created in 2014 to identify and address root causes of chronic disease in America. Central to the mission was an understanding that no one entity or institution would be able to solve the significant challenges to health and well-being that exist in communities across the country. Instead, the collaborative project has focused on the need for multi-sector partnerships to foster innovative initiatives that address the social determinants of health.

Founding partners of BUILD included The Advisory Board Company, Colorado Health Foundation, de Beaumont Foundation, Kresge Foundation and the Robert Wood Johnson Foundation. "We all got together because we understood improving the nation's health has expanded farm beyond battles with bugs and bacteria," said de Beaumont Foundation Chief Program and Strategy Officer, Brian Castrucci. "We needed a new approach to tackle the upstream determinants of health."

Since 2014, the key concepts (see box) have attracted a number of other thought leaders across the country to the initiative. To date, BUILD has supported nearly 40 projects in 21 states plus the District of Columbia.

Most recently, the de Beaumont Foundation released "Conversations with Hospital and Health System Executives" in January 2018. The new report focuses on how hospitals and health systems could move upstream to improve community health with insights from 11 leaders on the front lines. The BUILD Health Challenge's Hospital and Health System Engagement Research Study (HERS) served as the foundation for the report.

"These are though leaders willing to step outside their four walls to focus on health ... not just treating disease," said Castrucci. "All too often, when you try to have a conversation about health, it devolves into discussions about pills and procedures," he continued. "The conversation we need is about policy and partnerships."

The report - available online through NashvilleMedicalNews.com or through the "Resources" tab at buildhealthchallenge.org - delves into the motivations behind participating in community initiatives, as well as practical guidance for healthcare executives interested in taking the next steps in their own communities. The report includes five 'How To' guides addressing:

"This is for whomever wants to see this sea change happen in our nation," Castrucci said of the report. He added that as the nation makes the shift to value-based care, it has become increasingly evident that hospitals, health systems, and physician groups must extend their practice outside the physical confines of their own campus. He pointed out providers have multiple options to help a child with asthma, for example, but noted all the medications and breathing treatments in the world won't have any real impact if a trigger found in the child's environment is left unaddressed.

"You've got to go beyond the walls of the clinic ... that's what chronic disease has pushed us to," Castrucci asserted. "If we stay in that stagnant model inside four walls, we're not going to make the progress that we want."

He added most hospital leaders recognize the community isn't simply a pipeline of patients for their facility and are truly driven by mission to find real, sustainable solutions to barriers to good health. However, Castrucci said it's important to differentiate between recognizing social needs and truly addressing social determinants.

For a patient who isn't compliant with a medication protocol because most of their hourly wage has been consumed by housing, food, and transportation, putting that person in touch with pharmacy discount programs could help mitigate that specific need. However, Castrucci pointed out, passing living wage laws like the one in Austin, Texas, addresses the bigger issue.

"Your natural default in healthcare is to look at your individual patient. That's why healthcare can't do this alone," he noted, adding it was critical for health leaders to partner with public health departments, local non-profits, policymakers and even their competitors to address larger root causes.

Stepping into the unfamiliar is uncomfortable, he conceded. "First is scary. That's why we're getting these stories out to see what others have done. That's what this report is about ... learning from those folks who went first," Castrucci concluded.