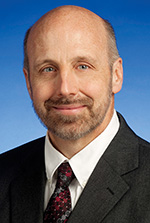 Tim Jones, MD has been named chief medical officer for the Tennessee Department of Health where he will serve as an advisor to the commissioner on matters of health policy and assist in setting priorities for the department. Jones has been serving as acting chief medical officer since the retirement of David Reagan, MD.

Jones first came to TDH in 1997 as a Centers for Disease Control and Prevention Epidemic Intelligence Service assignee. Following this assignment, he joined TDH as a general medical epidemiologist. He has served as Tennessee's state epidemiologist and director of the TDH Communicable Environmental Disease and Emergency Preparedness division since 2007 and was promoted to assistant commissioner in 2012.

An internationally recognized expert in epidemiology and communicable and foodborne diseases, Jones has been a subject matter expert and consultant to the World Health Organization, has worked as a CDC advisor in numerous countries and served as a Polio Eradication Project Consultant in the Republic of Yemen. He has authored more than 150 peer-reviewed publications and has won multiple awards for his work. Jones received his medical degree from Stanford University and completed postgraduate training in family medicine and maternal and child health.