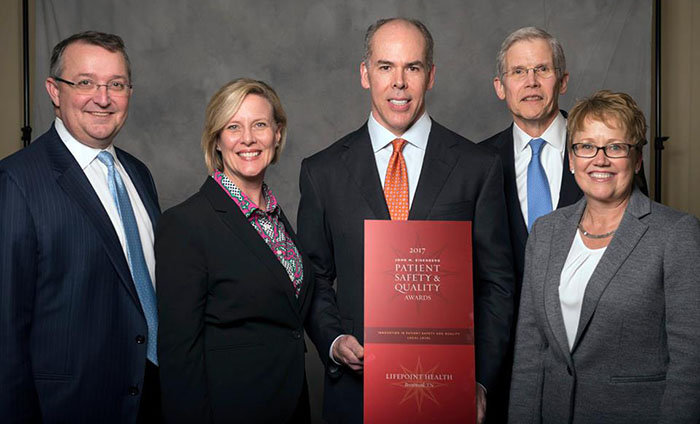 LifePoint Health has been named a recipient of the prestigious John M. Eisenberg Award for Innovation in Patient Safety. The first investor-owned health system to earn an Eisenberg Award, LifePoint was recognized last month for its National Quality Program, a structured process for ensuring consistent, high standards of quality and patient safety. The program has led to a 62 percent improvement in aggregate patient safety in LifePoint facilities across the nation. Additionally, from 2010 to 2017, hospital-acquired infections at LifePoint hospitals' decreased by 78 percent for urinary tract infections, 58 percent for sepsis infection, and 73 percent for pneumonia. The Eisenberg Awards are presented annually by The Joint Commission and the National Quality Forum (NQF).

Christine Lovly, MD, PhD, assistant professor of Medicine at Vanderbilt University Medical Center (VUMC), has received a $200,000 grant to support promising new research on lung cancer. The Lung Cancer Foundation of America (LCFA) and the International Association for the Study of Lung Cancer (IASLC) have partnered to fund the Lori Monroe Scholarship for Lung Cancer Research. Lovly, who operates a research laboratory at Vanderbilt-Ingram Cancer Center (VICC), has focused on early detection of lung cancer and the need to develop novel diagnostic and treatment strategies, including liquid biopsies, for patients with the disease. Lovly recently helped develop a liquid biopsy blood-based assay used to identify specific gene mutations associated with the development or relapse of small-cell lung cancer.

TriStar StoneCrest recently announced the annual HCA Awards of Distinction recipients. Orthopaedic surgeon Juris Shibayama, MD was the physician winner of the Frist Humanitarian Award. Dick Brown won the same honor for volunteer, and lead clinical dietitian Vicki Taylor received the employee Frist Humanitarian Award. HCA Innovators Awards were presented to Courtney Cole Maynard, who works in maternity services, for her work in quality and patient safety and to Lisa Queen, who works in the ICU, for service excellence.

Nashville-based Healthcare Management Partners (HMP) served as a lead part of the award-winning team that won 'SEC.363 Sale of the Year ($10MM to $25MM) at the 12th Annual Turnaround Awards hosted by The M&A Advisor. The 363 award, which relates to a section under the Bankruptcy Code under which assets are sold pursuant to a court order with certain protections which buyers value, was earned for the firm's work on the Sale of Central Iowa Healthcare (CIH) assets to Allen Health Systems, Inc. (UnityPoint).

TriStar Horizon Medical Center's Medical Surgical Unit earned the 2017 Unit of Distinction (UOD) Award in an annual program that recognizes and rewards exemplary nursing units at HCA Healthcare affiliate facilities. The "Unit of Distinction" designation is achieved through measurable, exemplary performance in the strategic areas of Advocacy and Leadership, Consistency in Nursing Practice and Operations, and Leveraging Scale to Drive Performance. During 2017, 820 HCA Nursing units participated in the program. Using 23 different criteria, units were scored to determine which would receive UOD honors, which earns them a spot in the Top 5 percent of all HCA Medical-Surgical and Critical Care hospital units.