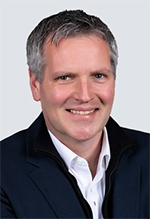 Lirio, whose Precision Nudging™ solution improves health outcomes through AI-powered behavior change, has named Marten den Haring as new chief executive officer. As part of an executive transition, Mike West, who has served as Lirio's CEO since 2018, will continue to lead the board as executive chairman.

"This is the right time for Lirio, for Marten, and for me to pass the baton," said West. "Marten's vision and passion for Lirio is infectious and he has helped our team thrive during challenging times of the pandemic. Marten has been a trusted partner since joining the company two years ago, and I look forward to continuing our close collaboration in my role as executive chairman."

Den Haring most recently served as Lirio's chief operating officer and has over 20 years of experience in the technology sector. Last year, he was named to the Nashville Healthcare Council Fellows program, along with 30 other healthcare executives from across the United States. Prior to joining Lirio, Den Haring was Senior Vice President of Platform at Element AI in Montreal, Canada and held various executive positions at Oracle, OpenText and Digital Reasoning. He holds a Master of Science and a PhD in Economics.

"Under Mike's leadership, Lirio has assembled an incredibly talented team that is united around our mission to impact the health of millions of people around the world," said Den Haring. "It is an honor and a privilege to serve as Lirio's CEO and enable us to deliver personalized digital care experiences that will motivate people of all ages, ethnicities and socioeconomic status to lead healthier lives."

As executive chairman, West serves as special advisor to the CEO, focusing on strategy, balance sheet, and partnerships. He remains Chairman of the Board. Both leadership moves were announced internally earlier this week and took effect on Monday, May 17, 2021.

"Marten brings a strong track record of driving growth and innovation, and proven transformational leadership, all of which position him well for success," said Lirio board members Bill Mayer and Kevin O'Brien. "Our Board of Directors believes that Marten is the right leader to guide Lirio into its next phase of growth as the company continues to establish itself as a leader in digital health."