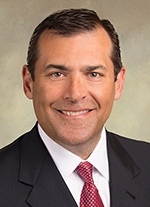 Lowe, a 15-year veteran of HCA, most recently served as vice president of Human Resources for HCA's Central and West Texas Division in Austin, Texas. Previous leadership includes serving in human resources for a number of teams and divisions. He earned his undergraduate degree in Human Resources from New Mexico State University in Las Cruces and his master's from LSU. He replaces Mike Cassity, who retired at the end of 2016 after 25 years of service to HCA.