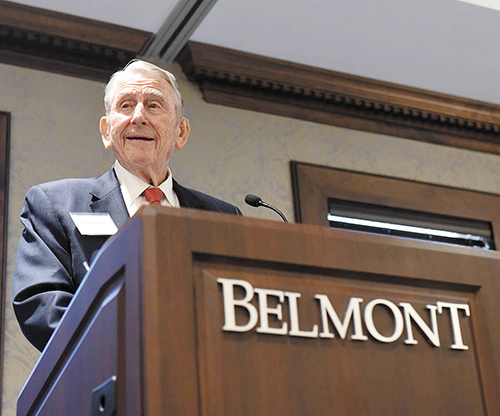 Gov. Winfield Dunn addresses attendees at the McWhorter Society Luncheon where he was honored for a lifetime of service. Photos courtesy of Belmont University

During the 2018 McWhorter Society Luncheon held at Belmont University last month, The Honorable Winfield C. Dunn was presented with the Distinguished Service Award, and the seven inductees into the Tennessee Health Care Hall of Fame Class of 2018 were announced.

McWhorter Society Chair Bill Gracey and Past Chair Harry Jacobson, MD, presented Gov. Dunn with the high honor for his lifetime of service and significant contributions to the health and healthcare-related academic programs at Belmont University, in addition to his work to improve the health of Tennesseans through his public service and advocacy.

The nonagenarian, who earned his dental degree from the University of Tennessee College of Dentistry in 1955, also spent several years working as an executive with Hospital Corporation of America and later with Memphis-based MedShares. He and his wife, Betty, have been previously honored for their hands-on work with the Nashville Heart Association, and the Dunns have also worked tirelessly for the Nashville chapter of the American Cancer Society. Dunn has served on a number of healthcare boards including Phycor, Total eMed, and Behavioral Healthcare Corporation. He is the sixth individual to receive the McWhorter Society Distinguished Service Award.

The event was also highlighted by the announcement of the 2018 Inductee Class for the Tennessee Health Care Hall of Fame, which was established in 2015 to recognize healthcare luminaries with ties to the state. Craig Becker, president and CEO of the Tennessee Hospital Association and a member of the Hall of Fame selection committee, announced the newest honorees:

The induction ceremony for this latest class of luminaries is set for Oct. 16 at Belmont University.