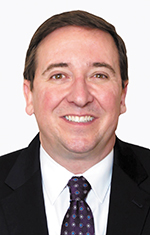 Mental Health America of Middle Tennessee President and CEO Tom Starling, EdD, was sworn in as chairman of the national MHA Board of Directors at the organization's annual meeting last month.

Starling - who holds degrees in psychology, theology, ethics and education administration - has led MHAMT since 2009. "We've been around for 72 years, since 1946," he noted of the local organization. "We were started by Dr. Frank Luton, who was the first chair of Psychiatry at Vanderbilt."

Starling added Luton and a $500 donation from the Junior League of Nashville launched the nonprofit that now provides professional and community education, advocacy, links to resources and an array of specialty programs. "A third of our staff includes the Tennessee Suicide Prevention Network, and they provide suicide prevention training and resources across the state," said Starling. "For 34 years, we've had an Aging & Alzheimer's program to train both lay caregivers and professionals in facilities," he continued. "Our forte in the landscape of behavioral health is really education and advocacy."

Starling noted MHAMT is among the largest affiliates in the South. In fact, the local branch has expanded to the point that the organization is rebranding this month to become MHA of the MidSouth as the service area expands to also include areas east to Chattanooga and west to Memphis.

In his new national role, Starling said, "I would love to continue to emphasize the B4Stage4 mantra." He continued, "We have to be better at prevention and early intervention and recognizing the signs. We need more integrated care. We should really be focusing more on the whole person."

Starling added engagement is critical to help prevent suicides and stressed the importance of making a connection ... which might come from a support group but could also easily come from joining the church choir, an exercise class or hobby group. "One of the biggest protectors against suicide is connectedness," he reiterated. "Our society is becoming so fragmented and isolating. I would encourage any community to look at how they can increase connectedness."

He also will advocate for increased screening for mental illness. Starling noted a child has to have a physical to enroll in school or play sports but no such mandate occurs for the evidence-based mental health screenings available. While he noted providers might hesitate to 'label' a child, the flip side is that screenings could save lives.

Starling added that although the stigma of mental illness is still pervasive, recent events have begun a national dialogue. He said he appreciated the media's handling of last month's high profile suicides, which included reiterating that help is available and running the number for the National Suicide Prevention Lifeline throughout the news reports.

Additionally, having sports heroes including Olympian Michael Phelps and basketball star Kevin Love open up about their struggles has underscored mental illness can impact anyone at any time. "Getting help is not a weakness," concluded Starling. "It takes real strength to get help."