More than Just a Number 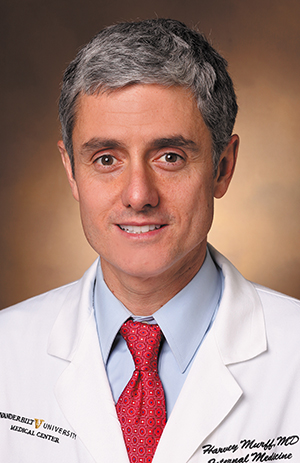 Growing older shouldn't mean fewer options in care. That's what Harvey J. Murff, MD, MPH, is trying to instill in medical students and staff, alike. The interim chief of geriatrics at Vanderbilt University Medical Center arrived at VUMC in 2002 and has been instrumental in research and training efforts geared toward creating better outcomes for older Americans.

A Memphis native, Murff majored in history at the University of Mississippi but grew interested in medicine at the encouragement of his pre-med roommate.

He went on to attend the University of Tennessee Health Science Center in Memphis, followed by an internal medicine residency and a year of chief residency at The Mount Sinai Hospital in New York City. Following a fellowship at Brigham Young Women's Hospital in Boston, he received his Master of Public Health from the Harvard School of Public Health before returning home to Tennessee.

"I was hired for my interest in research, and Vanderbilt was really pushing their focus on patient safety and quality of care," said Murff. "They want to train people who are leading healthcare into the future and are actively working to develop and educate a workforce in geriatrics."

Faculty in VUMC's Division of Geriatric Medicine recently obtained funding to focus on training non-geriatric physicians and to provide focused geriatric training to a younger generation of medical students. "Geriatrics is such a huge demand, and we're doing what we can to educate and meet that demand," Murff said.

Despite the growing need for geriatric-trained providers - courtesy of an aging baby boomer population - Murff said it's a tough specialty to fill due to misconceptions and an often medically complex population. More diagnoses mean more cognitive work and clinic time - a challenge to providers already pushed to be more efficient and see more patients. And unlike most younger patients, who easily dress and cook for themselves, older patients often require more one-on-one time to ensure basic needs are being met.

"We want to see more influx of younger medical students interested in geriatrics and who decide to pursue that as a career," Murff said. "There have been more and more combined programs after residency and fellowship, and a growing aging population means there are healthy older folks not getting therapy they need because of preconceived notions."

However, Murff said working with older adults has distinct advantages, including an interest in their own health not always found among younger adults. "They have wisdom because they've seen more and are familiar with their health at a deeper level, so you get a partnership that's pretty rich," said Murff, who also works with the Nashville VA Medical Center. "They're usually well aware of things going on and interested in working with you to make sure they have the best quality of life."

Offering older patients a better quality of life means asking the right questions, and that's just what Murff and his team are doing behind the scenes. Current research efforts include investigating the use of fish oil to combat a number of health problems, from heart disease and colon cancer to nicotine addiction. That's because smokers are shown to have decreased levels of omega 3, which can drive up anxiety, depression and addictive tendencies.

Researchers also are collaborating with colleagues in other departments to address long-standing age limitations in clinical trials and high-risk procedures, such as transplants. "Age doesn't necessarily account for functional status and frailty," said Murff, who's urging investigators to consider how pre-transplant geriatric assessments might improve the selection process and outcomes for seniors.

"Age alone shouldn't be a cutoff. There are older individuals who are living very active lives and have many good years ahead of them. A doctor might base a decision solely on a number that might seem high, but we need better assessments of frailty," he said. "Age can be a complicated variable, and there are objective and validated measures we can take to identify factors that would better feed into where patients are."

The division also is leading a study investigating the need to deprescribe medications for seniors. "We see older patients in the hospital taking medication upon medication, and doctors are often hesitant to stop them although we don't know where the meds came from or if they're doing any good," Murff said. "Let's send them out with less meds rather than more. Gigantic medication lists are a very common problem; and as doctors, we don't do as good a job as we should to see what patients do or don't need anymore. There's a great opportunity in the hospital to get pharmacists and their entire team involved, and we believe this research could be very promising," Murff concluded.