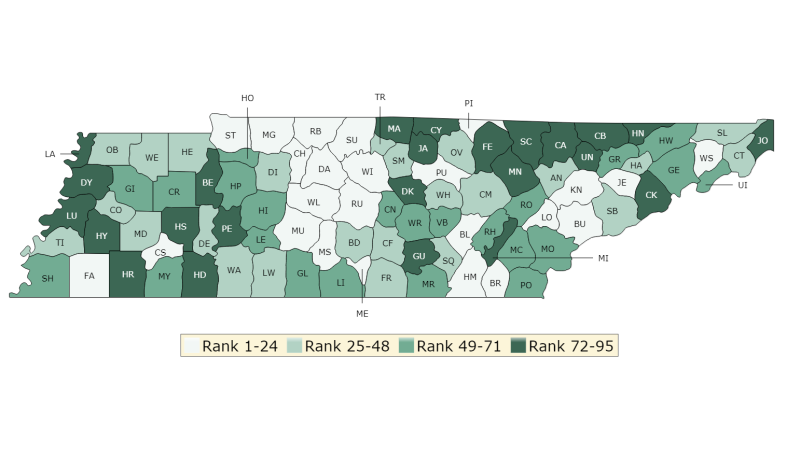 On March 19, the Robert Woods Johnson Foundation in collaboration with the University of Wisconsin Population Health Institute released the annual County Health Rankings for 2019. All eight counties in the Nashville MSA ranked in the top quartile of the state's 95 counties for health outcomes, measuring how long people live and how healthy they feel. Of the eight MSA counties, all but Davidson also ranked in the top quartile for health factors - behaviors, clinical care, socioeconomics, and physical environment - with Davidson ranking at the top of the second quartile.

However, as usual, there is much more work to be done as Middle Tennessee and the state lag behind the nation in a number of key metrics. Race and ethnicity also play a major role in how specific populations fared. For example, in the healthiest Tennessee county, low birthweight was a problem for 6 percent of the population. In the least healthy county, low birthweight registered at 10 percent. Racial disparities come into play when looking at specific populations statewide, with low birthweight disproportionately impacting American Indian (9 percent) and Black (14 percent) residents.

Those disparities are not unique to Tennessee. The County Health Rankings report noted, "Across the U.S., values for measures of length and quality of life for Native American, Black, and Hispanic residents are regularly worse than for Whites and Asians. For example, even in the healthiest counties in the U.S., Black and American Indian premature death rates are about 1.4 times higher than White rates. Not only are these differences unjust and avoidable, they will also negatively impact our changing nation's future prosperity."

Nashville's size and diversity of activities helped Davidson County when it came to access to exercise opportunities and healthy food, along with access to providers. When it came to socioeconomic factors, however, Davidson County ranked 36th out of the 95 counties, faring worse than state averages in several areas including percentage of children living in poverty, children in single-parent households, violent crime, and number of high school graduates (although simultaneously surpassing the state in percentage of population with at least some college). Housing also presented challenges to Davidson County in terms of shortages and cost. However, at press time, Mayor David Briley had just announced "Under One Roof 2019" - a $500 million initiative to create 10,000 new affordable housing units in the city over the next decade. He also called on the private sector to commit an additional $250 million to fund additional affordable housing solutions over the next 10 years.

The annual rankings provide a snapshot of communities but were also designed to provide a starting point for change. To drill down on the data for counties throughout Tennessee and to explore actions to improve outcomes, go online to countyhealthrankings.org. You can also go online to register for the April 23 webinar - County Health Rankings & Roadmaps 101 - to use the 2019 data to move toward action in the community.