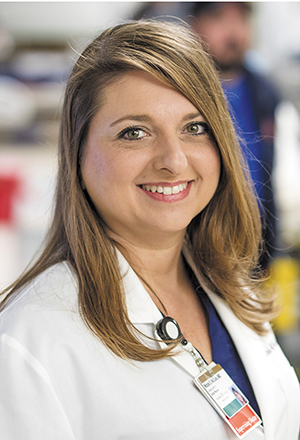 Growing up in Franklin, Nicole McCoin spent more than her fair share of time around hospitals as her father battled chronic ischemic heart disease. That experience, combined with a love of science, ultimately led her to her specialty. "I realized the significant positive impact that physicians ... particularly those in the Emergency Department in my case ... had on our family and the greater community," she explained.

Staying nearby as her father's condition escalated, McCoin completed her undergrad and medical degrees at Vanderbilt, followed by internship and residency. As she was completing her training in 2006-2007, McCoin was named chief resident and ultimately continued as faculty in the Department of Emergency Medicine at Vanderbilt University Medical Center where she now holds an endowed directorship.

McCoin loves every aspect of her field. "From a clinical perspective on shift, it has been such a privilege to be able to care for people throughout our entire community in their times of greatest need," she said. "From a leadership perspective, emergency medicine is a field that attracts people who like to problem-solve and innovate together in a variety of situations from on shift in the Emergency Department to the board room solving operational challenges." she continued.

As much as she enjoys all of her roles, teaching is a passion. "Whether in didactics or at the bedside, sharing knowledge with others is incredibly fulfilling," she said. McCoin noted that it takes years of experience and repetition to develop skills and knowledge in the specialty of emergency medicine, and it's exciting to watch the growth of medical students and residents. "You can see such a transformation happen throughout the course of resident training," she said. "Additionally, beyond the classroom and bedside, mentoring and sponsoring junior faculty, residents and medical students as they navigate their own career paths is extremely rewarding."

McCoin said she benefited from similar attention from a number of generous physician mentors throughout her career. "However, my greatest mentor was my father, Col. Richard Streiff. Although his career was in the military and not in medicine, he taught me what it takes to be a true leader," she said of the West Point graduate who served as President Eisenhower's military aide. "He was an amazingly gifted man who was a born leader, and I am so grateful I could learn so much from him."

Not surprisingly, the apple doesn't fall far from the tree. In 2012, McCoin was named a Harvard Macy Scholar, and she is currently part of the Hedwig van Ameringen Executive Leadership in Academic Medicine Fellowship at Drexel University College of Medicine. Selected as part of the 2019-20 class for the all-female fellowship, McCoin said the opportunity has been a transformative experience. "This fellowship has been one of the best experiences I have had in my career," she noted. "It has opened my eyes to even greater opportunities, so there are a lot of goals on my list now for the next 10 years," she said with a laugh.

As much as she loves her specialty, McCoin readily recognizes the stress that is inherent in emergency medicine. "We break bad news often. We have to make significant decisions with limited information and in a rapid fashion," she said. "Therefore, finding ways to manage that stress are incredibly vital, particularly after years of work in this career."

For McCoin, her greatest stress busters are family, friends and tennis. She and husband Patrick are parents to Catherine, 13; James, seven; and youngest Richard, four, who is named after her late father. With everyone home from work and school amid the pandemic, she's trying to "find simplicity in the chaos." She also loves spending time with her mother and extended family in the area, along with a close network of friends. "My old friends make me feel like I'm still 25, and my tennis buddies keep me laughing."

While McCoin said she doesn't pretend to have all the answers, she has gained some hard-won knowledge over the years. "I think a day should be considered a 'good day' if you have tried to do something a little bit better than the day before," she said, adding the sentiment is widely applicable to all phases of life. "If you try to be a little kinder, study a little harder, tackle a new project, get a little healthier ... then I think you can qualify that day as a success."

It's a good reminder as the next busy shift starts, residents arrive, and patients present in the ED looking for skilled, compassionate care. "Each day is a clean, new slate, and I try to take advantage of that and give each day my all," McCoin concluded.