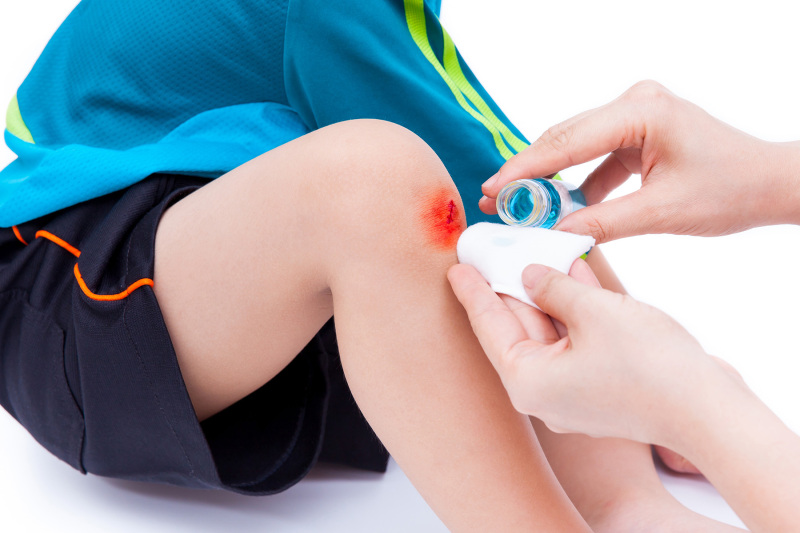 National Institutes of Health researchers have identified a novel role for a gene known as heat shock protein 60 (Hsp60), finding that it is critical in tissue regeneration and wound healing. The study found that topical treatment of an Hsp60-containing gel dramatically accelerates wound closure in a diabetic mouse model.

The study also describes the mechanism by which this works, finding that Hsp60 protein is released at the site of injury, signaling wound healing to initiate. The findings, reported by researchers at the National Human Genome Research Institute (NHGRI), the National Eye Institute (NEI), and their colleagues, may help in the development of effective therapeutics for accelerating wound closure in diabetic patients, as well as for normal wound healing and scar reduction.

"This study proposes an unusual role for a well-known gene," said Shawn Burgess, Ph.D., head of NHGRI's Developmental Genomics Section and senior author on the study, which was published online today in the journal npj Regenerative Medicine. "This gene is found in every organism from bacteria to man. We have shown that in vertebrates, it has a surprising role in immunity that is essential for wound healing."

Protein products of the Hsp60 gene are known primarily for their role in ensuring that other proteins are folded correctly. The Hsp60 protein has also been reported to serve as a signaling molecule that induces an inflammatory response to bacterial infection from a cut.

In fact, approximately 15 percent of diabetic patients will develop a foot ulcer, commonly located on the bottom of the foot. The ulcers form from multiple factors, such as reduced sensation in the feet, poor circulation and skin irritation. Foot ulcers can be serious and may lead to hospitalization or even amputation. Diabetes is the leading causes of non-traumatic lower limb amputation in the United States.

The researchers hope that greater insight into the genetics underlying wound healing can someday lead to better treatments for this condition and result in a better understanding of how tissues regenerate in general.

Based on previous findings that the Hsp60 protein was necessary for an inflammatory response, the researchers hypothesized that the molecule might also be involved in an organisms' ability to regenerate.

Using zebrafish - an ideal model for this work because fish can regenerate many tissues, including fins - the researchers used targeted mutagenesis, making specific and intentional changes to the DNA sequence of a gene, to "knock out" Hsp60 from the genome. The mutant fish appeared to develop normally, but when the researchers wounded them by injuring the cells involved in hearing or amputating a caudal fin, the fish were unable to regenerate their cells and fins, respectively.

Using fluorescently tagged leukocytes (immune cells that flock to the site of injury as part of the inflammatory response under normal conditions), the researchers demonstrated that without the Hsp60 gene, there were significantly reduced numbers of leukocytes at the injury site. This suggested that the Hsp60 protein was somehow acting as an attractant that promoted inflammation, a necessary component of wound healing.

"When we injected Hsp60 directly to the site of injury, the tissue surrounding the wound started to regenerate faster," said Dr. Burgess. "That's when we got really excited."

However, the most striking finding from the study was that actually applying a topical treatment of the Hsp60 protein to a puncture wound in diabetic mice stimulated complete healing after only 21 days. Mice without the treatment did not show improvement over the same time frame.

Although promising, this finding has only been shown in mice and is yet to be tested in humans.

"We hope that topical treatment with Hsp60 will act the same way in humans," said Dr. Burgess. "And we believe it will, but more work is needed. We also want to know if it will help any wound heal, not just wounds encountered by people with diabetes. Will it reduce scarring and increase the speed of healing?"

This work opens many avenues for future research. Dr. Burgess' group is now working to test a number of other heat shock proteins to see if they are also involved in wound healing.

This study reveals a potential for therapeutic development, but also highlights the value of basic science research. The fundamentals of cell signaling in wound healing and tissue regeneration are still poorly understood, with basic science research helping to clarify many important aspects of this complicated process.

"When we understand the biology better, we can more easily apply it to human treatments," Dr. Burgess said.

The National Human Genome Research Institute is one of the 27 institutes and centers at the NIH, an agency of the Department of Health and Human Services. The NHGRI Division of Intramural Research develops and implements technology to understand, diagnose and treat genomic and genetic diseases. Additional information about NHGRI can be found at: www.genome.gov.