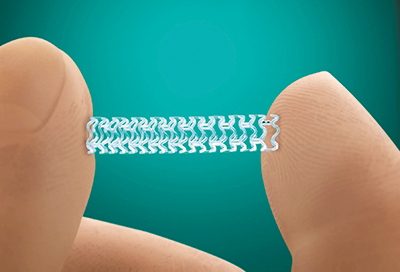 Update: On March 18, 2017, the FDA released a letter to healthcare providers regarding an agency investigation about an increase rate of major adverse cardiac events (MACE) with Absorb BVS.

The first dissolvable heart stent has made its way to Middle Tennessee, and cardiologists are singing its praises.

Unlike traditional metal stents, which remain in the artery for life, the Abbott Absorb™ stent is made of a naturally dissolving material, similar to dissolving stitches. It disappears in about three years, once the vessel has reformed. Saint Thomas Health, part of Ascension, has become the first hospital in Middle Tennessee to utilize the device, which was granted approval from the Food and Drug Administration in July 2016.

"This has been a long time coming," said Paul McMullan, MD, Saint Thomas Health interventional cardiologist who was the first to perform the procedure at the hospital using the fully bioresorbable drug eluting coronary stent. McMullan said that, like most new devices, the manufacturer has been slow and intentional in its rollout to avoid overutilization and misuse, and to ensure cardiologists are well trained on the new device. "We're still not using it routinely, and we're selecting patients very carefully," said McMullan, who has placed a handful of dissolvable stents since his first case in October.

Technical difficulty also comes into play, meaning ease of deliverability and the size and shape of the vessel. Patients also must be able to comply with medical therapies. Similar to the newer metal stents, the dissolvable model is coated with a drug to reduce scarring. However, patients are still required to take blood thinners for one year or more, and those with bleeding issues or who simply can't comply with medication maintenance aren't likely candidates. Short-term medical risks of the dissolvable stent are similar to those of its metal predecessors, and surgical implementation and patient recovery are both identical.

"The biggest benefit is that there's no metal in the vessel long term," McMullan said. "When we put multiple stents in arteries, it becomes more and more difficult over the years because multiple stent layers can become problematic and prevent us from getting to the new blockage." That's often the case for stent patients who require open-heart surgery down the road.

The Role of Stents

"Before stents, the vessel could tear and shut down blood flow when opened up by a balloon ... or you would blow it up, and a narrow vessel would shrink back to where it started," McMullan said of pre-stent angioplasty.

"The game-changing role of stents is that they keep the artery where you put it. If there's a tear, the stent keeps it from flopping out and shutting out blood flow. Radial force keeps it pushed out and held in place," he continued. Over time the vessel heals and forms to its new size, and radial force is no longer needed to keep it in place.

"God made blood vessels to respond to our body's needs," McMullan said. "As the heart contracts and relaxes, the flexing of those vessels is what helps control blood delivery. With dissolvable stents, that function shortly returns, and the vessel retains the phase of motion functionality that you can't have with long-term rigid stents."

Looking Back, Looking Ahead

In discussing the new stent with patients, McMullan said safety and comparability to other stents are always primary concerns. While bare metal stents were first introduced in the early 1990s, they often triggered growth of scar build up, or restenosis, within the stent. The availability of drug-coated stents around 2001 meant less scar tissue but still required patients to take blood thinners for a year or longer, and the stent stuck around for life.

Although still relatively rigid, the new stent is the best today's cardiologists have to offer eligible angioplasty patients. And while deliverability remains the biggest hurdle for stents in general, McMullan expects that to become more streamlined as the science behind stents continues to unfold.

"We'll see new technology like this gradually take root and become more widely utilized in patient care, and physicians will become more comfortable with it with use," he said. "Data from long term trials also will allow us to treat with confidence and will influence more utilization of this device."