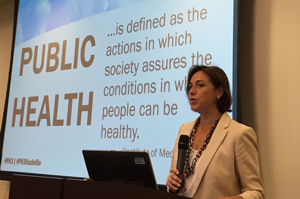 Public Health 3.0: It's time for an upgrade.

DeSalvo has been touring select communities to advance the cause of Public Health 3.0, billed as a major upgrade in public health practice to emphasize cross-sectional environmental, policy and system-level actions that directly affect the social determinants of health and advance health equity. The Public Health 3.0 initiative builds on the work of Healthy People 2020.

The event kicked off with a welcome from Bill Paul, MD, MPH, director of Metro Public Health. While Nashville is the 13th healthiest city in Tennessee, he pointed out the state ranks 43rd in the nation. And despite this country's vast resources, Paul noted the United States doesn't even crack the top 20 when it comes to healthiest nations in the world.

"We should do better. We can do better, and I think that's part of the reason we're here," Paul stated. He added the task of improving the health and wellbeing of all Davidson County residents is a large one that can't be accomplished alone. "It's bigger than any one organization," he said. "Improving, sustaining our health will take collaboration; it will take a combined effort."

He continued, "One of the most powerful things we can do to improve health is to weave health into the fabric of the city." Paul said you shouldn't have to 'be special' to be healthy. Instead, it should be ordinary to live a long, healthy life. "That's part of what we want to do is change the normal so the healthy choice is the easy choice."

On the plus side, Paul noted there are a growing number of success stories that show what's possible with a focused effort. An initiative to change policies and practices in birth hospitals in Nashville increased breastfeeding initiation from 61 percent to 84 percent in the span of three years. Schools have reduced sugar in chocolate milk. "The kids didn't notice the difference, and now 52,000 pounds less sugar is going into our children each year," Paul said.

However, on the flip side, Paul said there are neighborhoods in Nashville where the chance of dying early is four times greater than in other neighborhoods just a few miles away. "So whatever we do, when we advance health, we've got to advance fairness in health and how health is distributed."

Leslie Meehan, MPA, assistant director of Primary Prevention for the Tennessee Department of Health, said, "Our nation, as you know, is suffering from a preventable epidemic of chronic disease enabled by the places, spaces and choices that challenge our health on a daily basis. This is truly the health crisis of our time."

She added, "We know we cannot treat our way out, but we can prevent our way out." To that end, the TDH launched the Primary Prevention Initiative in 2013, which has led to almost 2,000 projects across the state from creating park benches with anti-smoking messages to building community greenways and gardens. "Most importantly, the Primary Prevention Initiative provides us the opportunity to change the notion that health is only about healthcare."

Senator William Frist, MD, former U.S. Senate Majority Leader and founder of NashvilleHealth, said that amid all the excitement of Nashville being an 'It' city, it was important to make sure citizens weren't left behind. Remaining competitive, he noted, requires a healthy workforce. Frist said NashvilleHealth has opted to hone in on three key focus areas - tobacco use, hypertension, and child health - to begin to flip the script on poor health.

DeSalvo told attendees taking responsibility for the health of a community "is something all of us, as a society, need to stand up and make a decision that better health is a critical underpinning of our vitality and quality of life for everybody."

She said the time is right for this conversation in part because of some of the changes happening in the country. DeSalvo pointed to recent data that shows life expectancy staring to decline in some parts of the United States, as well as widening gaps by income with a difference of 15 years greater longevity for men in the top income levels compared to those at the bottom.

"What is behind those numbers and statistics?" she questioned. Taking a closer look at the data and the underlying traits of communities that are not seeing those declines, DeSalvo continued, "You begin to see there are some inherent characteristics about communities working together to create the conditions in which everyone can be healthy."

That work, she said, goes well beyond the public health department or healthcare system to a much broader shared vision, goals and actions by the larger community. DeSalvo said the social determinants of health - economic opportunity, housing, environment, education, food, safe neighborhoods, transportation - in combination with health behaviors really make up close to 70 percent of overall health, as compared to medicine, which makes up about 10 percent of someone's overall health. For that reason, she said, it is critical in this new iteration of Public Health 3.0 to build upon past success but to upgrade to a modern version that works across sectors and puts health in all policies.