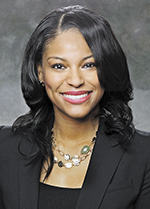 Richardson most recently served as president of Advocate Aurora Health's Central Chicagoland Patient Service Area where she oversaw the operations and strategic growth of their hospitals, clinics and ambulatory operations. Prior to joining Advocate Aurora in 2016, she was chief executive officer of Retreat Doctors' Hospital in Richmond, Va. She also held various leadership roles for HCA and Northwell Health.

Richardson earned both an undergraduate degree in biopsychology and cognitive science and a master's degree in public health from the University of Michigan. A fellow in the American College of Healthcare Executives, she serves on the board of directors for the American Hospital Association's Innovation Committee and Institute for Diversity and Health Equity.

Hospitalized patients with COVID-19 who received the rheumatoid arthritis drug baricitinib, in combination with the standard of care including corticosteroids, died less often than those receiving only the standard of care, according to a study released this week in The Lancet Respiratory Medicine.

The Tennessee Justice Center applauds USDA for its reevaluation and cost adjustment of the Thrifty Food Plan, a measure that is used to calculate the monthly Supplemental Nutrition Assistance Program (SNAP) benefit allotment.

Gen Cap America, Inc. ("Gen Cap"), a private equity firm focused on lower middle market buyouts, announced that, in partnership with management, it has acquired Lab Products, LLC and Harford Systems, LLC (together, "Lab Products") from Avidity Science, LLC. Terms of the transaction were not disclosed.

In collaboration with Blakeford Senior Life, Ben Oddo is releasing a podcast series this Thursday, September 2, titled Me and All My Friends.