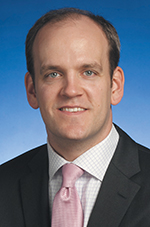 Roberts's service in Tennessee state government began in 2013 when he joined TennCare as general counsel. He was promoted to deputy director and chief operating officer in 2016, and Roberts was subsequently appointed as director of TennCare in January 2019 by the governor. During his tenure Roberts has been instrumental in the design and implementation of many of the agency's initiatives. Most recently under Roberts's leadership, TennCare submitted two proposals - Tennessee's Katie Beckett program and Tennessee's Block Grant plan - which are both pending approval by the federal government.