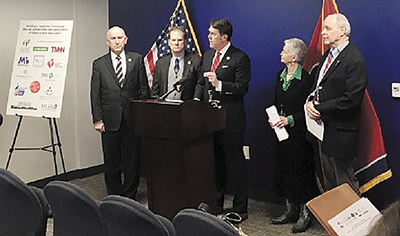 In late February, Tennessee Sen. Shane Reeves (R-Murfreesboro) and Rep. Bob Ramsey (R-Maryville) held a press conference in conjunction with NashvilleHealth to announce sponsorship of legislation to raise the minimum age to purchase tobacco and vaping products to 21 from the current age of 18.

The proposed legislation comes at a time when the health risks associated with vaping are becoming clearer. Last year, the U.S. Surgeon General released an advisory on e-cigarettes and use by teens. An earlier Surgeon General's report on tobacco use noted nine out of 10 smokers began when they were teens. In addition to raising the minimum age for purchase, SB 1200/HB 1454 would remove penalties for purchase from the purchaser, strengthen penalties for those selling to minors, redefine "electronic smoking device," and redefine "tobacco product."

At the press conference, attendees noted Tennessee's smoking rate of 22 percent is among the worst in the nation. In Tennessee, 20.3 percent of high school students reported smoking cigarettes or cigars or using smokeless tobacco or electronic vapor products at least one day during the last 30 days.

Currently, seven states and more than 400 municipalities have raised the tobacco and/or vape age minimum to 21 with several others considering similar measures.