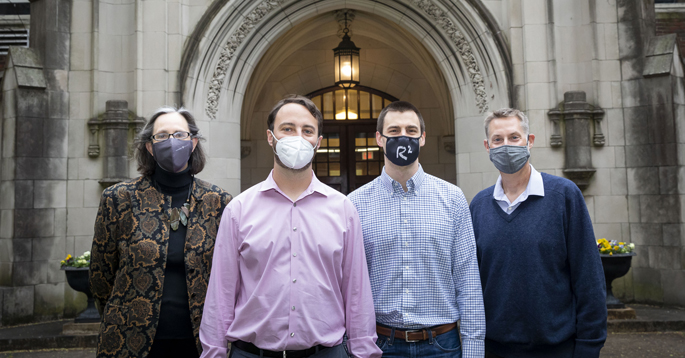 Tumors consume glucose at high rates, but a team of Vanderbilt researchers has discovered that cancer cells themselves are not the culprit, upending models of cancer metabolism that have been developed and refined over the last 100 years.

Instead, non-cancer cells in a tumor -- primarily immune cells called macrophages -- have the highest glucose uptake, the group reported April 7 in the journal Nature. The findings that different cells in the tumor microenvironment use distinct nutrients according to their own metabolic programs could be exploited to develop new therapies and imaging strategies, the investigators said.

"The field of cancer metabolism has really exploded over the last 20 years, but it has been based on this observation that Otto Warburg published in 1922 -- that cancer cells can consume glucose at a very high rate," said Jeffrey Rathmell, PhD, Cornelius Vanderbilt Professor of Immunobiology and director of the Vanderbilt Center for Immunobiology. "We now know that tumors include many types of cells, and it's surprising that non-cancer cells are actually the major glucose consumers in the tumor."

Warburg's observation is also the basis of tumor imaging by positron emission tomography (PET), which uses a radioactive tracer of glucose (FDG) to "light up" cancer cells based on their glucose metabolism. But FDG-PET doesn't always give the results that clinicians expect.

"I had been curious about why PET scans are 'hot' or 'not hot' for many years because the kidney cancer type that I study, from what we understand about the biology, should light up hot on PET and often doesn't," said W. Kimryn Rathmell, MD, PhD, Hugh J. Morgan Professor and Chair of the Department of Medicine. "Jeff and I have had many conversations about which cells are using the glucose: is it the cancer cells; is it the immune cells; how does it all fit together? You can just imagine our dinner table."

Two MD-PhD students -- Bradley Reinfeld in Kimryn Rathmell's group and Matthew Madden in Jeff Rathmell's group -- took on the challenge of answering those questions. In concept, their approach was straightforward: administer PET tracers to mice with tumors, isolate the tumors, separate the tumors into various cell types using cell surface marker proteins and flow cytometry, and measure radioactivity in the cells.

The team used two different PET tracers, one to follow glucose and one for the nutrient glutamine, and six different tumor models including colorectal, kidney and breast cancer. In each case, they found that myeloid immune cells (primarily macrophages) had the highest uptake of glucose, followed by T cells and cancer cells. Cancer cells, in contrast, had the highest glutamine uptake.

"We think this is a general phenomenon that extends across cancer types," Madden said.

The researchers demonstrated that certain cell signaling pathways rather than limiting nutrients drove the differences in glucose and glutamine uptake.

The findings contrast with a prevailing view of a metabolic competition in the tumor microenvironment where the cancer cells "win" to deplete nutrients and suppress immune cells.

"The idea has been that the cancer cells are gobbling up all of the glucose, and consequently, immune cells can't get enough glucose and can't do their job," Madden said. "Our data suggest that nutrients aren't limiting. Instead, cells are programmed to consume certain nutrients, and there is partitioning of nutrients between cells: cancer cells pick up glutamine and fatty acids; immune cells pick up glucose."

Knowing that cells in the tumor microenvironment use different nutrients "may allow for specifically targeting particular cell types -- for new therapies or for imaging people's tumors," Reinfeld said.

Kimryn Rathmell added, "We're in a good place now to be able to have more sophisticated PET radiotracers. It's time to think about testing fluoridated glutamine or other nutrient probes in patients."

The findings are also important for interpreting FDG-PET imaging results, she said. "We order FDG-PET scans all the time, and we need to have a good sense of what that information is providing us. We use it to judge tumor response, but it may be telling us about inflammatory response and not tumor response."

The collaborative project involved Reinfeld and Madden in every experiment, Jeff Rathmell said, noting that the two students reached out to their fellow students in the Medical Scientist Training Program to explore additional tumor models. "It has been a very dynamic and fun collaboration," he said.

Other Vanderbilt groups involved in the studies included those of Charles Manning, David Merryman, Rachelle Johnson, Matthew Wilson, and Christopher Williams. The work also involved a close collaboration with the lab groups of Alexander Muir at the University of Chicago and Matthew Vander Heiden, who was recently named as the new director of the Koch Institute for Integrative Cancer Research at MIT.