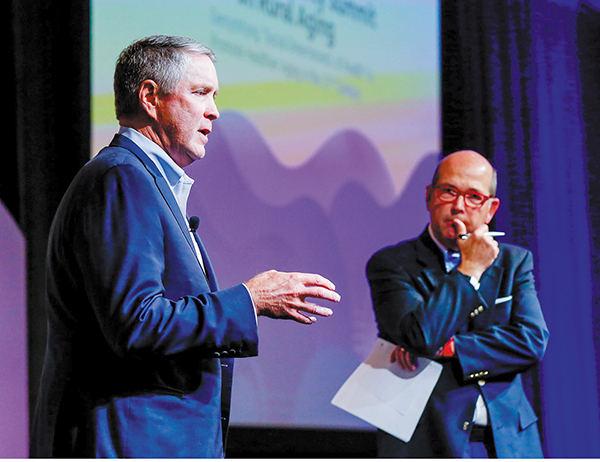 In August, Donato Tramuto, CEO of Tivity Health and founder of Health eVillages, spearheaded the 2019 Connectivity Summit on Rural Aging in partnership with the MIT AgeLab and Jefferson College of Population Health. The third annual event drew nearly 250 attendees to Nashville to focus on the impact of social determinants of health on aging. Stakeholders represented community and faith-based organizations alongside government agencies and representatives from academia to pool knowledge and resources.

More than 10,000 people a day age into Medicare coverage, with 25 percent living in small towns or rural areas. The idea that zip code is at least as important as genetic code is increasingly being considered when looking at health and wellness interventions. On average, there is a 15-year difference in life expectancy between the nation's most and least advantaged residents.

"The time is now to explore solutions to improve our healthcare system as a whole, and to acknowledge the critical role that social determinants of health play in the health of individuals and communities," said Senator William Frist, MD, one of the conference's featured speakers. "Our daily behaviors, where and how we live, work, eat and play, have a greater impact on our health outcomes and long-term well-being than the medical care we receive, yet our health spending is disproportionately concentrated on the latter."

According to the Kaiser Permanente 2019 Social Needs Survey, one-third of Americans are dealing with stress that is tied to meeting basic human needs including adequate food, reliable transportation and stable housing. More than two-thirds reported experiencing at least one unmet need in the past year.

Tramuto noted geographic isolation begets social isolation, which he called the chronic condition of the 21st century. He added that in an era when we claim to be the most connected, the very technology that links people together also leads to increased isolation. "Physical contact is one of the best ways to lessen feelings of loneliness and isolation," he added of one simple solution. He pointed out that while Tivity's signature program Silver Sneakers improves health through exercise, it's the shared laughter, stories and connections made among the group that is the best medicine.

"Take the time to listen to the stories of others," he stressed. "Each time we fail to take the time to hear each other's stories, we are helping to fertilize and nurture the epidemic of loneliness, particularly in rural America."

However, Tramuto noted isolation and loneliness can happen in urban areas, as well. He cited recent statistics that show about one in three people 65 and older live alone, half of that group being over age 85. For seniors, the loss of a spouse, children growing up and moving away, and having car keys taken away, creates a cumulative effect of isolation and loneliness that takes both a physical and emotional toll.

"According to the CDC in 2017, 47,000 suicides occurred in the United States. People 65 and over accounted for 20 percent of them," he said. Just days before the Nashville conference, an elderly couple in Washington state died by a murder/suicide pact because they could no longer afford their medication.

Research has shown the physical dangers for those with fewer social connections, as well, from interrupted sleep patterns to altered immune systems. "One study found isolation increases the risk of heart disease by 29 percent and stroke by 32 percent," Tramuto stated.

"The problems are clear," he continued. "The solutions, however, are more complicated." To continue the conversation about meaningful interventions, the conference highlighted community programming from across the country. Some solutions were low tech, but highly effective, including senior ride programs, food banks and companionship programs. Others relied on population health data to track barriers to care and deploy solutions. "It is no longer about innovation - we've innovated a lot over the last several decades," said Tramuto. "it is about integration."

To that end, Tramuto said the conference wasn't just an opportunity to become more aware of the social determinants keeping seniors from optimal health and well-being ... but instead was a call to take immediate action. Repeating the sentiments of Hillel the Elder and Robert F. Kennedy, Tramuto challenged: "If not now, when? If not you, who?"

The Power of Connection: Reversing Social Isolation in Rural America

Aging Well in Rural America: Stories from the Heartland