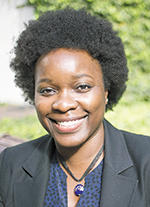 While America's federally funded and supported health programs continue to face an uncertain future, the Tennessee Justice Center is taking steps to ensure nearly a million kids in the state have the healthiest futures possible.

In April, the TJC announced the addition of attorney Kinika Young as director of Children's Health. The newly created position was made possible after the organization was awarded a grant from the prestigious David & Lucile Packard Foundation for its "Insuring America's Children - Reaching the Finish Line Project."

Previously a partner with Nashville-based law firm Bass, Berry & Sims, PLC, Young has been tapped to lead TJC's efforts to protect and improve public health insurance programs that serve 980,000 Tennessee children. She has also been charged with working to ensure all Tennessee children have access to the resources they need to grow up healthy.

"I had been doing pro bono work for the Justice Center and was looking for an opportunity to help people more directly," said Young, a former Big Brothers Big Sisters of Middle Tennessee mentor. "Given the current political climate, I saw the need to get more involved with fighting for social justice issues for children since they're our future."

TJC Executive Director Michele Johnson said Young's commitment would better help the TJC navigate the increasingly controversial healthcare landscape. "Children's health is something we've always done, and this position gives us the ability to really bring the best in health policy that's sound and will have positive benefits for decades," said Johnson, who co-founded the organization more than 20 years ago.

"Kids who have a healthy start will earn more as adults, and they'll be less likely to have trouble with school and drugs and alcohol," she said. "Giving kids a healthy start means they'll have more full and successful lives as adults, which will benefit us for generations. We want to provide every amount of resources we can invest in making sure they have healthy starts."

Proposed budget cuts could equal a $500 million loss annually to existing state health programs. "We'd be faced with either rolling back eligibility or cutting services like therapy to many children," Young said.

Provider reimbursement also could take a hit, meaning fewer doctors might accept Medicaid/TennCare patients, wait times could be extended, and medical services could be limited. "We've made some good progress in recent years making sure Tennessee kids are insured," said Young. "Currently only 4 to 5 percent of the state's children are still uninsured, which is the lowest number in recent history. We don't want to go backward."

Many of the state's more than 60,000 uninsured children lack coverage due to complicated rules and parents who don't understand the process. Too often, middle class families face a lifetime of medical bills simply because they're unaware of eligibility options, the TJC has found. In other cases, children who are natural born citizens remain uninsured because of the parents' legal status and fear of deportation. Regardless of the reason, Young said uninsured children account for much of the uncompensated care absorbed by Tennessee hospitals and providers, which consequently impacts every family and community in Tennessee.

"Our long-term goal is to improve on the health safety net system for children and to get the uninsured rate down further," said Young.

A Partner to Families, Providers

In addition to partnering with families, Young also works with providers to clarify common misconceptions about government-funded programs. "Many doctors still haven't heard of us and don't realize how we can actually benefit them as an ally in their practice," she said.

The TJC helps providers navigate the system and advocates for patients who might be denied coverage by HMOs. Young also educates providers who don't accept TennCare about the program and discusses the full impact of the state's Medicaid system with those who do.

Children comprise more than half of Tennessee's state-funded healthcare program participants. Recent statistics show that of Tennessee's 1.5 million children, nearly 57 percent are covered by TennCare (the state's Medicaid program) or CoverKids (the state's Children's Health Insurance Program). Employer-sponsored or other health plans cover another 37 percent of the state's children, 1 percent are enrolled in plans through the Affordable Care Act's HealthCare Marketplace, and a little more than 4 percent have no coverage.

"We want to make sure every child who's eligible gets health coverage," Johnson said. "It's a huge goal, but by partnering with providers, community and church groups, we can accomplish that if we try. Healthcare has become very polarized, but we can't lose it to politics. It's too important to Tennessee's children."