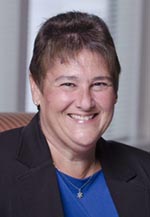 Jan. 2 marked the first day on the job for Tina Gerardi, MS, RN, CAE, the newly appointed executive director of the Tennessee Nurses Association. Gerardi, who replaced the recently retired Sharon Adkins, brings three decades of experience in nursing advocacy at both state and national levels to her new role.

From Nursing to Nurse Advocate

After earning a bachelor's degree in nursing with a concentration in community health from the State University of New York at Plattsburgh College, the New York native worked eight years as a staff nurse and assistant nurse manager at Albany Medical Center. She went on to receive her master's in nursing from SUNY Binghamton, graduating as a dual major with a family nurse practitioner certificate and as a clinical nurse specialist with a concentration in education.

Gerardi worked as a clinical nurse specialist and risk management clinical director before serving as director of clinical support services and quality improvement at Saratoga Community Hospital. She discovered a passion for advocacy as director of clinical consulting at the Healthcare Association of New York State, which led to an appointment as deputy directory and eventually CEO of the New York State Nurses Association.

She spent the last several years working for the Tri-Council for Nursing - an alliance of four autonomous nursing organizations including the American Nurses Association (ANA) and the American Organization of Nurse Executives (AONE) - in a grant-funded role related to academic progression. Gerardi said the TNA position was an opportunity to get back into directly supporting her fellow nurses.

"Tennessee is now undertaking efforts that New York has already done, so I'll be able to bring some of that experience and help move the profession forward in that way," Gerardi said. "It was very enticing to have the opportunity to get back into the ANA family, which I really missed over the last four years."

Gerardi looks forward to embarking on clearly defined goals for the TNA. "I know there's a two-year moratorium on new legislation, so I want to look at language for APRNs in Tennessee and work on expanding their scope of practice," she said. "I also want to look at the different chapters throughout the state and work on bringing the whole organization together, since a more symbiotic relationship around advocacy and legislative work will help advance the profession."

She also is gearing up to tackle industry-wide challenges like reimbursement cuts, which affect every facet of nursing. "The healthcare system has been in chaos for several years, and it really affects every budget for every facility," she said. "It affects nursing staff and the ability to provide for patients the way they want to.

"Advocacy on behalf of patients and access to quality patient care will continue to be a huge part of what we do as a profession, and bedside nurses do that every single day. Nursing is the most trusted profession, so we have to keep hammering that home with lawmakers. We know what's best for patients, and they need to listen to us," she stated.

While she still misses patient care, Gerardi said the decision to pursue association work has been a rewarding one. "I was having a hard time when I was making that decision, but I knew I could make a difference," she said. "My mentor told me the profession is now my patient and that helped ground me. Advancing the profession is my new role, and I've embraced that."