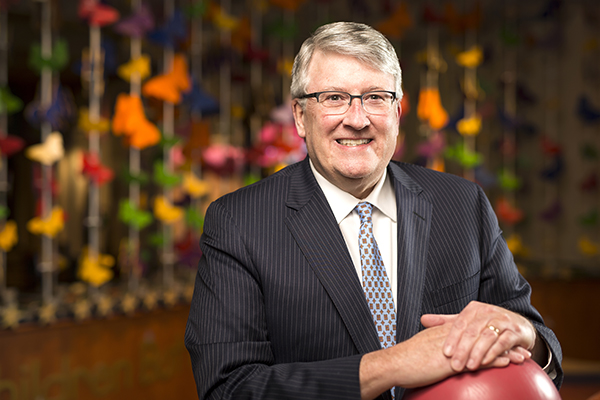 The embodiment of a servant leader, Gregory joined the Medical Center in 2007 as senior vice president and chief business development officer. In January 2011 he was named CEO of Monroe Carell Jr. Children's Hospital at Vanderbilt.

Gregory quickly became one of the hospital's most visible and effective representatives on the Vanderbilt campus and in the community.

Continually focused on serving the needs of children and families from throughout Tennessee and surrounding states, Gregory led Monroe Carell Jr. Children's Hospital at Vanderbilt's remarkable growth across all areas both in the hospital and in surrounding clinics, building on its reputation as the region's premier pediatric health care provider.

"We are feeling a profound sense of loss over Luke's passing at so many levels. He was an exemplary leader who served his colleagues, our patients and their families with great compassion. Personally, I'm extraordinarily grateful for the opportunity that I had to work alongside this exceptional man for the past 13 years and want to express my deepest sympathy to his wife, Susan, and their children," said C. Wright Pinson, MBA, MD, Deputy Chief Executive Officer and Chief Health System Officer for Vanderbilt University Medical Center.

While Gregory was CEO, Children's Hospital underwent critical expansions of inpatient space, including a 33,000-sq. ft. addition that added 33 beds in 2012. Also in 2012, the Doctor's Office Tower, which houses Children's Hospital's outpatient clinics, added 21,000 sq. ft. of new space with an additional floor.

Children's Hospital is completing a 160,000-sq. ft., four-floor expansion that has the facility well-positioned for future growth. Gregory also presided over the opening of many units and centers including the Ryan Seacrest Studio in the hospital.

Gregory also played an instrumental role in the growth of Children's Hospital's off-site services including Monroe Carell Jr. Children's Hospital Vanderbilt at Williamson Medical Center, an outpatient surgical center in Spring Hill and the soon-to-open surgery and clinics facility for children in Murfreesboro. He was also instrumental in developing the "after-hours clinics" concept that has placed Children's Hospital pediatricians into community pediatric clinics across Middle Tennessee providing care to children closer to their homes.

"Luke's passing is a tremendous loss for the Vanderbilt community and for Nashville. He made countless contributions that were fundamental to the growth and vibrancy of our Children's Hospital, and many other programs throughout VUMC. We will remember Luke not only for his superb leadership, but also for the friendship, warmth and kindness he generously shared with everyone," said Jeff Balser, MD, PhD, President and Chief Executive Officer for Vanderbilt University Medical Center and Dean of the Vanderbilt University School of Medicine.

Among his many other contributions, Gregory was active in the development of Vanderbilt Health One Hundred Oaks and was instrumental in forming multiple business partnerships such as Vanderbilt Home Care's relationship with Walgreens to provide home infusion services, as well as acquiring multiple physician groups and overseeing key strategic relationships with health systems across the nation.

As a fellow of the American College of Healthcare Executives (ACHE), Gregory received the 2013 Regents Award from the ACHE his for four decades of service and leadership in health care management.

Prior to joining VUMC, Gregory, a longtime Nashvillian, served as senior vice president for Operations with Baptist Hospital and was CEO and recently chairman of the board for the Blakeford Inc. Prior to that he was an executive at Northeast Georgia Health system.

He was actively involved in the community, having served with numerous organizations and boards including the Children's Hospital Alliance for Tennessee; Tennessee Association for Homes and Services for the Aged; Tennessee Board for Licensure for Healthcare Facilities and the Board of Visitors for Vanderbilt University Divinity School. He supported the annual Nashville Christmas Parade. In 2017, he served as honorary co-chair for the Iroquois Steeplechase.

An Eagle Scout, he also served as an executive board member with the Middle Tennessee Council for the Boy Scouts of America.

He was preceded in death by his parents, John Sr. and Sara Gregory, who were extremely influential in his life especially while growing up in Oxford, Georgia. In addition to Susan, his wife of nearly 40 years, he is survived by their two grown children, Kate (Mathew) and Ben; two grandchildren, Mathew Jr. and Sara; and his brother, John Gregory, Jr.