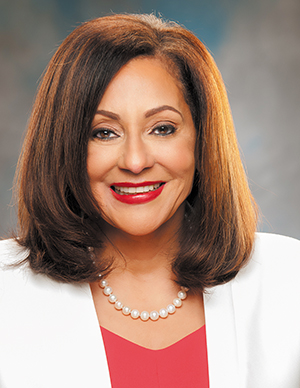 Surgeon, researcher, author, educator, trailblazer - when Veronica Mallett set her sights on being a physician at a young age, it's doubtful she envisioned the path her career would take and the multiple roles she would fill.

"I was first inspired to become a physician by my interaction with my pediatrician, Dr. Sarah S. Scotten," she recalled. "She was the first female graduate from Wayne State University Medical School in Detroit. She was compassionate, professional, caring, and strong, and I wanted very much to be like her."

An outstanding student with an aptitude for science, Mallet fell in love with Barnard College at Columbia University after a visit. Although her father wanted her to go to school closer to home, Mallett ultimately convinced him to let her head to New York. She did return home for medical school at Michigan State, however, before later earning a master's in medical management from Carnegie Mellon.

Internationally recognized for her work in pelvic medicine and reconstruction, Mallett loves making a difference in other women's lives. "As a specialist in female pelvic medicine and reconstructive pelvic surgery, I have been able to transform women from being depressed and lacking confidence because they suffer with the unspeakable ill of incontinence or prolapse of their female organs and ... through reconstructive pelvic surgery ... transform them into active, confident, self-assured members of their family and their community."

To combine patient care with her other loves of teaching and research, Mallett chose to pursue a career in academic medicine. "This gave me an opportunity to form and mold the next generation of doctors and to train them to not only be skilled practitioners but to be empathetic, caring, holistic healers," she noted, adding it also allowed her to engage in research that might benefit her patients.

As she aspired to take on greater leadership roles, Mallett said she faced a number of challenges from finding a healthy work/life balance to helping break down gender barriers. Serving as a department chair at the University of Tennessee in Memphis and then at Texas Tech Health Science Center in El Paso prior to coming to Meharry, Mallett joined the small group of only 15 percent of Obstetrics and Gynecology Department heads to be female. "Now as a dean of an academic health science center of medicine, I joined the only 16 percent of women who are deans of allopathic medical schools, and I am one of three African-American female deans."

In addition to doing her part to tackle disparities in leadership, Mallett has also focused her efforts on health inequities and preparing a workforce to meet the needs of a diverse nation, including calling for increased attention on public education and social determinants of health. Improving educational opportunities, she said, is a key factor in leveling the playing field and optimizing health.

"My passion truly is for the mission of Meharry Medical College and our motto 'Worship of God Through Service to Mankind,'" Mallett continued. "I have always served underserved communities, and I have always understood that in doing so I am doing God's work ... and in training others to be engaged in that work and making sure they are excellent in doing it, I feel that I am making a difference."

She advises students to always remember what inspired them to enter medicine in the first place. Focusing on that motivation, she said, "will keep you honest, help you maintain your integrity, and keep you from losing sight of the patient and your humanity."

It's equally important to remember what enriches your life outside the workplace. "My husband and I are very proud of the blended family we have built, the closeness we are able to achieve, and the effort we all make to get together, stay together and support each other," Mallett said of the six children between she and husband Kevin Brisco. Of all the titles she holds, she said the best is that of 'Gigi' to her seven-year-old granddaughter. "She wants to be a scientist," Mallet added proudly.

Friendships also feed her soul. A double black diamond skier, Mallett hits the slopes each year with four other female surgeons. "I was their mentor, and then I became their friend," she said of her younger colleagues. "I would like very much to beat them down the hill in the next five years before it is a total impossibility," she added with a laugh. Considering the many mountains she has conquered throughout her career, what's one more?