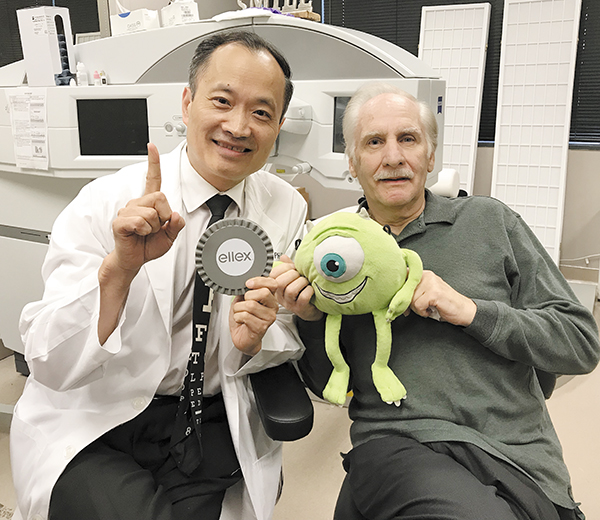 New In-Office Option for Many with Visual Floaters

Tony Ashley, 73, of Lebanon, Tenn., had suffered for many years from visually debilitating floaters. "They are like spider webs, very annoying," Ashley shared. "They float around, always interfere with my vision and get in the way of things that I really want to see."

Since the successful surgery, Ashley has been very pleased with the outcome. A few weeks after treatment, Ashley reported a 90 percent improvement in the appearance of his floaters.

Floaters are a common condition that can affect people of all ages, but generally become more predominant later in life. Floaters can appear as dots, cobwebs, squiggly lines, rings, or a combination of these, which temporarily obscure vision.

While this process of a vitreous detachment generally occurs without incident, in some circumstances, it can lead to the development of a wrinkle on the retina called an epiretinal membrane. This condition can cause blurred vision and sometimes require surgery. In rare circumstances, it can lead to retinal tears or detachments, which can cause permanent vision loss if not treated. Any patients with new onset of floaters, flashes of light, a curtain effect, or loss of vision should see an eye doctor immediately to ensure that the eye is healthy.

Laser floater removal is an in-office, minimally invasive procedure that can reduce the appearance of floaters. A surgeon uses a precise laser to focus on the floaters in the gel in the back of the eye. Nanosecond light pulses then evaporate collagen and hyaluronan molecules in the floater, converting them to a gas. The gas then dissolves and reabsorbs into the vitreous. The final result is that the floaters are removed or reduced in size.

The only other option for floaters is a more invasive surgery called a vitrectomy in which a portion or all of the vitreous is removed and replaced with a balanced electrolyte solution. This surgery needs to be performed in an operating room setting and does present more risk than laser treatment, as a surgeon must physically enter the eye with instruments.

The recently introduced Ellex laser is specifically designed for treatment of vitreous floaters. Features of this instrument include precise focusing capability, target illumination, and a superior energy beam profile. These features allow a surgeon to accurately visualize floaters relative to the structures in front and behind the lens and the retina. This combination of features, developed particularly for this purpose, allows the surgeon to safely target floaters without risk to other eye structures.