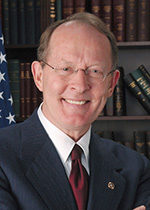 "I will not be a candidate for re-election to the United States Senate in 2020. The people of Tennessee have been very generous, electing me to serve more combined years as Governor and Senator than anyone else from our state. I am deeply grateful, but now it is time for someone else to have that privilege. I have gotten up every day thinking that I could help make our state and country a little better, and gone to bed most nights thinking that I have. I will continue to serve with that same spirit during the remaining two years of my term."

Alexander is the only Tennessean ever popularly elected both Governor and U.S. Senator. His 2008 general election vote total of 1,579,477 is the largest ever received by a statewide candidate.

Alexander is chairman of the Senate Health, Education, Labor and Pensions Committee. He authored opioids legislation signed into law in October which President Trump called "the single largest bill to combat a drug crisis in the history of our country." In 2016, he wrote the "21st Century Cures Act," which Senate Majority Leader Mitch McConnell (R-Ky.) called "the most important law of this Congress." In 2015, Alexander authored the "Every Student Succeeds Act," fixing "No Child Left Behind." President Obama called the new law "a Christmas miracle," and the Wall Street Journal said it was the "largest devolution of federal control to the states in a quarter century." As chairman of the Energy and Water Development Appropriations subcommittee, Alexander provided four years of record funding for national laboratories, supercomputing and waterways, including restarting Chickamauga Lock. You can read more about the senator's work here.

A seventh-generation Tennessean born and raised in Maryville, Alexander was twice elected governor of Tennessee. He was chairman of the National Governors Association and of President Ronald Reagan's Commission on Americans Outdoors. He then served as president of the University of Tennessee and U.S. Secretary of Education under President George H.W. Bush. In 2002, he was elected to the United States Senate and was re-elected in 2008 and 2014. His Republican colleagues elected him three times to be chairman of the Senate Republican Conference.

He is a country and classical pianist who has performed on the Grand Ole Opry and for the Billy Graham Crusade. When not in public office, he co-founded a law firm and two successful businesses. He and Leslee Kathryn [Honey] Buhler married on January 4, 1969. They have four children and nine grandchildren.

"One of the highlights of my time in the Senate has been working with Lamar Alexander," said Corker. "I often tell him he is the legislator of the decade because of the effective way he has worked across the aisle to pass legislation that directly affects the lives of so many throughout our state and around the country. As one of the finest statesmen our state has ever seen, Lamar will leave behind a remarkable legacy. I know he will press through the next two years with great vigor, and I look forward to all he will accomplish on behalf of Tennesseans as he completes his service in Washington. I thank Lamar for his friendship and am excited for Honey and him as they begin to think about their next chapter together."

"Lamar is finishing a stellar career in Tennessee politics," said Rep. Jim Cooper (TN-05). "I honor him for his service, but I also hope he will use his last two years in office to challenge President Trump the way that Bob Corker has done. I am worried that the Tennessee Republican Party is losing the legacy of Howard Baker: his willingness to investigate his own president, to insist on fiscal discipline, open markets, and civil rights. America needs that fair-mindedness now more than ever."