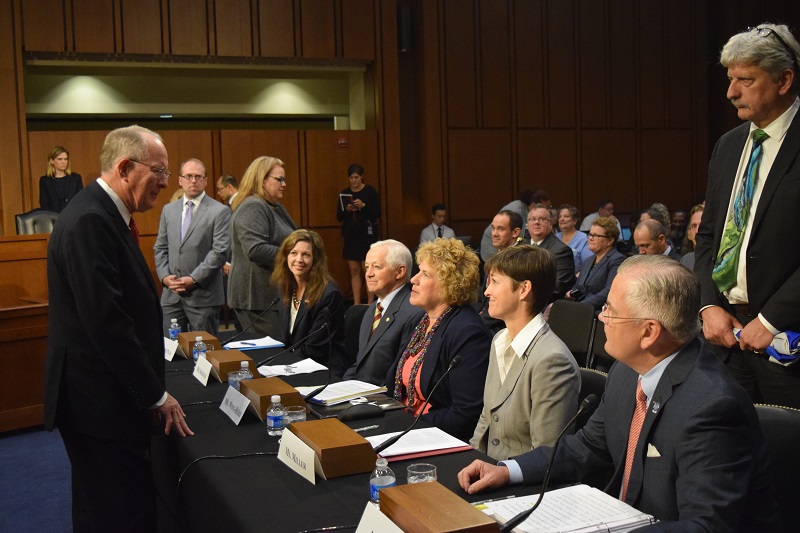 Five state insurance experts, including Tennessee Department of Commerce and Insurance Commissioner Julie Mix McPeak, were called on to testify before the committee on Sept. 6. McPeak, who is also president-elect of the National Association of Insurance Commissioners, has previously stated Tennessee's individual health insurance marketplace is unsustainable in its current form and nearing collapse.

"Tennessee in 2017 has continued to see health insurance carriers flee the market due, in large part, to the tremendous uncertainty surrounding the 2018 plan year, as well as to substantial losses in recent years," she said. McPeak noted Oscar Insurance Company has come in to provide marketplace coverage in the Nashville area and BlueCross BlueShield of Tennessee has tentatively agreed to offer coverage in the Knoxville area, which means there is at least one option for all Tennesseans through the Federally Facilitated Marketplace (FFM) for the coming year. "While we feel very fortunate that all Tennesseans will have such an opportunity, I do not think that many people would argue that having a single choice in 78 of 95 counties and a total of three insurance carriers offering ACA-compliant coverage in the state represents ideal marketplace competition."

McPeak said Tennesseans will once again see substantial rate increases, offset for many ... but not all ... by federal assistance in the form of advance premium tax credits (APTC). A key issue in price hikes, she continued, is the uncertainty around cost-sharing reductions (CSR). Many states have required insurers to file two sets of rates - one that assumes the federal government declines to fund CSRs for 2018 and one that includes funding. In Tennessee, McPeak said, carriers only filed one set that presumed CSRs would not be funded. "We asked carriers to identify the percentage of their rate request that is due specifically to uncertainty surrounding CSR funding. BCBST reported that 14 percent of its overall 21 percent average rate increase is due to CSR uncertainty," she said, adding Cigna cited 14.1 percent of its overall 42 percent increase being due to the uncertainty.

"The CSR funding issue is the single most critical issue that you can address to help stabilize insurance markets for 2018 and potentially bring down costs. And to be clear," she stated, "this issue is not an 'insurer bailout.' CSR funding ensures that some of our most vulnerable consumers receive assistance for copays and deductibles that are required to be paid under federal law and has the effect of reducing proposed premium increases that would otherwise increase the amount of APTC assistance provided by the federal government."

Alexander said, "This hearing is about taking one small step. A small step on a big issue which was been locked in a partisan stalemate for seven years - health insurance. This step is not so small to 350,000 Tennesseans and 18 million Americans -- songwriters, the self-employed, farmers -- those who do not get their health insurance from the government or on the job .... To get a result, Democrats will have to agree to something - more flexibility for states - that some may be reluctant to support. And Republicans will have to agree to something - additional funding through the Affordable Care Act - that some may be reluctant to support. Health insurance has been a very partisan topic for a very long time, but the bottom line is that 350,000 Tennesseans and 18 million Americans need our help. I hope we can stay focused on getting a result."

Alexander noted the focus of the HELP hearings has been pinpointed on the 6 percent of Americans purchasing insurance in the individual market. "That's where almost all the Obamacare debate has been the last seven years. The premiums have skyrocketed, and so have the co-pays and the deductibles - especially for people who get no government support to help buy their insurance," he said. "What we're trying to do is to see if we can take one or two or three small steps in September that lower premiums in 2018. And that's why we've had the insurance commissioners in yesterday, and the governors today." Alexander continued, "The problem with Obamacare was that so many decisions were moved to Washington, and so many restrictions were put on the states in their approval of insurance plans, that the plans got so expensive that people got priced out of the market. ...We need to get more decisions back to the states, more flexibility, more choices."

Addressing the committee, Gov. Haslam said, "My request to the committee this morning is that you do two things: first, that you move quickly to stabilize the individual insurance marketplace. Then, second, that you would undertake a serious effort to work together to address the cost of healthcare." He added that while times are good in Tennessee, "the crisis of healthcare and the uncertainty of its future threaten our state's citizens and the state's budget."

He continued, "Today, Tennessee finds itself with only three insurance carriers offering ACA-compliant coverage. In more than 80 percent of our counties, citizens have only one insurance option. These limited options are provided to Tennesseans at substantial cost increases - possibly as much 40 percent for 2018, after increases totaling as much as 139 percent for some from 2014 to 2017. Tennessee's experience of fewer choices at higher costs is not sustainable. We are on a path where citizens simply won't have an option to purchase from the insurance marketplace or can't pay for the limited options available to them. Either way, the system fails."

Haslam asked Congress to consider three steps to prevent the collapse of the individual marketplace by 1) funding CSR payments, 2) creating a short-term reinsurance program, and 3) providing more flexibility to states.

For a video of the Sept. 7 hearing and remarks from all five governors, click here.

The committee will meet on Sept. 12 to hear from health policy experts on state flexibility and on Sept. 14 to hear from a state insurance commissioner, doctors, and patient advocates.

As for steps following the next two hearings, Alexander said, "I'm hopeful that maybe some combination of continuing cost sharing for a period of time and significant changes in flexibility for states - probably, mostly through changes to section 1332 since it's already in the Affordable Care Act - might provide a basis for action we can take this month. This action wouldn't end the process - that would only be step one, and then we'd go pretty quickly to step two on a long-term, strong, vibrant individual market, and I hope we can begin to spend most of our time on the larger issue of healthcare costs."