Ashley Newton, MPS, PMP, has been named chief operating officer for Centerstone's Research Institute and vice president of Center for Clinical Excellence. Newton previously served as vice president of Center for Clinical Excellence for Centerstone's Research Institute. In her new role, she will work to implement the Research Institute's high value treatment in the context of the local environments and oversee the team's operations management and collaboration. Newton joined Centerstone in 2006 and has previously held both clinical and leadership roles. She earned both her undergraduate and master's degrees from Middle Tennessee State University. She is a certified by Massachusetts Institute of Technology in Design Thinking, Lean Six Sigma methodologies, is an ACRA-ACC clinical supervisor and a Project Management Professional (PMP). 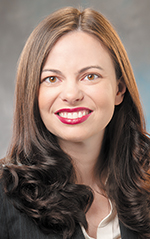 Jennifer Lockman, PhD, has been named vice president of Clinical & Transitional Research. She previously served as the director of the research area. In her new role, Lockman will manage the Research Institute's clinical research projects, serve as a liaison with external researchers and assess the best methods for measuring clinical outcomes. She joined Centerstone in 2007 and has extensive grant experience, having served as the principal investigator of two Garrett Lee Smith Suicide Prevention Grants and two National Strategies for Suicide Prevention grants (funded by SAMHSA). She earned her doctorate in counseling psychology from Purdue University, West Lafayette, Ind. and her master's in professional counseling from Lipscomb University. Contact: Mara Naylor