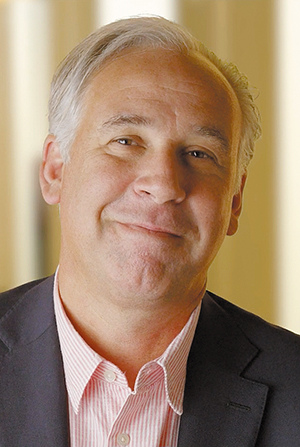 A Conversation with Paul Kusserow

Paul Kusserow - CEO of Amedisys, one of the nation's largest providers of home health, hospice and personal care services - sat down with Nashville Medical News this summer to discuss the foundational principles that drive the mission and have led to substantial growth.

Launched as a home health company in 1982 by the late Bill Borne, the company went public in 1994 as Analytical Nursing Management Corporation before changing its name the following year to Amedisys, Inc. "It's a classic garage tale," said Kusserow. "It literally started out of his garage in Baton Rouge and quickly built up."

Kusserow, who was previously with Humana, was named CEO in late 2014. At that point, he said Amedisys' primary focus was still home health with a small hospice line that has since grown tremendously. Today, he said the home health and hospice lines of business are almost equal in terms of earnings, and the company has added personal care to its services. "We've also been expanding on our palliative care business," Kusserow added. "There's a very high demand for palliative care."

Seniors make up the vast majority of the company's clients across all service lines. Kusserow estimated 90+ percent of those being served are elderly with the federal government being the largest payer. "We do have some small commercial business in hospice and home health," he noted, but added it was relatively minor. "Most of home health and hospice and personal care is covered by Medicare and Medicaid in some way or another so that's largely where we play."

Although founded and headquartered in Louisiana, Amedisys moved their executive offices to Nashville in 2015. Today there are nearly 65 working from the offices in Cummins Station with plans to expand to 100. Kusserow said creating an executive location to attract and retain the talent to support new initiatives was a key factor in the decision to plant roots in Nashville. In addition to the city being a center for healthcare, he said the entrepreneurial climate was also very attractive.

"And recruiting to Nashville has been extremely positive and easy," Kusserow noted, adding the typical response has been: "When do you need me there?" While people have been willing to move, Kusserow said another perk of the Nashville office is being able to tap into local talent with a depth of healthcare experience to continue to move the company forward.

Amedisys partners with more than 3,000 hospitals and 65,000 physicians to delivery post-acute care. Currently, the company is in 38 states plus the District of Columbia with 21,000 employees in 475 locations serving more than 376,000 clients across all lines of business. "We're largely strong in the Southeast and the East in general," said Kusserow, adding they also have a presence on the West Coast in Washington, Oregon, California and Arizona.

Although the hands-on care is similar across the nation, Kusserow said drive times are a major differentiator among markets. "If you're located here, you'll do six visits a day. If you're located in Montana, you might do two," he pointed out. "It's very, very hard to do home health in remote, rural areas." That said, he added the company does a lot of home health business in rural Tennessee but noted the geographic span between residences in rural areas of Montana, Wyoming or Idaho is a very different proposition and a factor in why the company hasn't spread as quickly in that section of the country.

Still, Amedisys covers a lot of territory. Kusserow noted caregivers drove about 80 million miles last year. The company delivers care in the home 50,000 times per day, every day, across the nation. On the clinical side, Amedisys utilizes a range of nursing and therapy disciplines. In hospice, they also employ bereavement counselors, social workers and chaplains. On the personal care side, the aides take on non-clinical work to assist with activities of daily living (ADLs). With strong familiarity of their senior clients, Kusserow said personal aides are often the ones who recognize early predictors of oncoming health issues.

Despite years of experience in management consulting and strategic planning, Kusserow began his tenure with Amedisys by assuming he knew nothing. He spent three months interviewing patients, employees and referral sources on a listening tour where he spoke to several thousand people across more than 20 states.

"It became very apparent to me that our employees, our patients and our referral sources should define what this business should be," said Kusserow. He added those with whom he spoke defined the business in three ways: provide the best quality, find the right people, and ensure the best tools are available to support the care mission and staff.

"We focus maniacally on quality," he said of the top mandate. "We've grown our star ratings from when we first started to measure them in home health, that's where the stars are, from 3.2 stars to now about 4.4 stars." He added that of 320 home health centers, 90 percent are four stars and above.

He added delivering quality care does two other things: referral sources like it, and good people want to work at high quality organizations. Kusserow pointed out physicians and hospitals are sophisticated clients who want what is best for their patients and look at quality measures before referring. On the employee side, he said the company reputation helps attract and keep people who believe in the mission.

Kusserow pointed out Amedisys doesn't own equipment or facilities. Instead, their biggest asset is the 21,000 people who make up the team. "People vote with their feet," he said of attracting and keeping good employees. "In a full employment economy like what we've got now, it's hard. We have fundamentally infinite demand, and the only thing that's restricting us is our ability to be able to go find, hire and train people."

He continued, "We want to make sure if we find them, that they are really happy." Kusserow added the company works hard to keep employees engaged.

"And if we don't keep them, we need to know why - and then we need to fix it," he continued. "We've reduced our turnover since I've been here by more than half of what it was, so now we're down to about 17 percent, which is the best in the industry. It was around the low 40s, so we've fought that very hard."

Despite the success in lowering turnover rates. Kusserow isn't satisfied. "We're still trying to get lower and lower, because I believe that anybody who is in this business who comes to work for us should want to work nowhere else."

At the corporate level, Amedisys has invested time and talent to build analytic, knowledge, training and software tools to ensure those in the field have what they need to do their jobs effectively and efficiently. "We're constantly working to make sure the best people have the best tools so they can deliver the highest quality," said Kusserow.

In addition to in-house tools, Amedisys has partnered with outside tech providers that complement their business model. Last year, the company invested in Nashville-based Medalogix, a predictive analytics firm in the home health and hospice space. The technology helps Amedisys craft care plans and pathways and alerts the company to red flags that might require a change in direction. More recently, Amedisys announced a partnership with health technology company ClearCare to better coordinate communications between personal care and skilled home health providers along the continuum.

"If we do all these things really well, we grow ... fast, and that's what we've been doing," Kusserow said.

In the five years since he joined Amedisys, the company has seen growth in value in the 500-600 percent range, while also paying down debt. The first half of 2019 has continued that positive trend. According to second quarter reporting released at the end of July, the first six months of this year saw increases in financial metrics across the board compared to 2018, including increases in net service revenue and adjusted EBITDA. The first half of 2019 resulted in a net service revenue increase of just under $150 million compared to the same time frame last year.

It's also been a busy year for expansion and forging new partnerships. So far in 2019, the company has expanded services into more counties in New York, closed on acquisitions of hospice providers in New Jersey and Oklahoma, and entered the partnership with ClearCare.

Right care, right time, right place has become the healthcare mantra, and Kusserow believes Amedisys has a big role to play in this new value-based era. He noted baby boomers, as they have throughout their lives, are once again changing the business trajectory of healthcare. Kusserow said they don't want institutionalization and believe the technologies are out there to allow care to come to them at home, which bodes well for Amedisys.