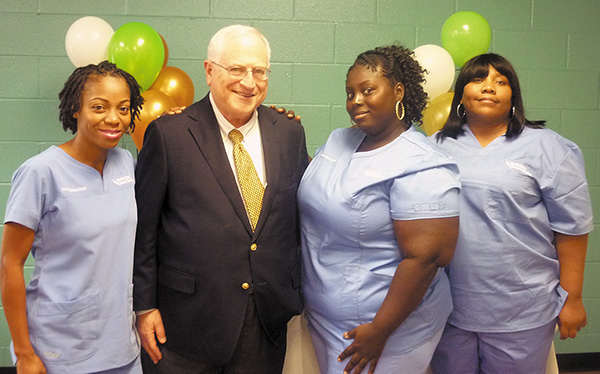 Following in his cardiologist father's footsteps, the New York native arrived in Nashville in 1967 to begin his own path to medicine. Tannenbaum at Vanderbilt University, where he received his undergraduate degree, doctorate and medical degree.

After an internal medicine internship at Vanderbilt University Hospital, he went on to complete an additional internship at Jewish Hospital of St. Louis, followed by nephrology training at Barnes Hospital - both affiliates of Washington University School of Medicine in St. Louis.

"I really enjoyed internal medicine; and in those days, Vanderbilt was already a leader in hypertension management," Tannenbaum said of his career progression. Since hypertension was managed by nephrologists at Washington University, his transition to kidney specialist was a natural one.

After completing his training in St. Louis and a brief time in Dallas, Tannenbaum returned to Nashville in 1985. A serial entrepreneur, Tannenbaum founded REN Corporation-USA, a publicly traded provider of dialysis services, in 1986. He served as president, chairman and CEO of the company until 1993, when he founded Medical Information Management Systems, Inc., a medical software company and developer of the PEARL EMR system. PEARL was the first internet-capable electronic medical record and an early pioneer in community health information networking.

In his medical practice, Tannenbaum realized that 80 percent of dialysis patients were commuting from across Middle Tennessee and neighboring states. "Dialysis is required three times a week, and these patients had nowhere to receive treatment in their hometowns," Tannenbaum said. "That's a tremendous burden on families who are driving them and on patients who already don't feel well. I started looking into the construction side of things for how to bring treatment to patients in rural communities."

In 1998, Tannenbaum founded National Nephrology Associates, Inc., a nationwide dialysis services provider, where he served as chairman and CEO. During construction of the company's new clinics, he observed that the sophisticated HVAC systems, stringent electrical requirements and complex water systems sent some general contractors running.

Rather than give up, Tannenbaum formed his own specialized construction group dedicated to a standardized approach. As NNA grew and clinics emerged coast to coast, however, he realized the difficulty of managing a sizeable, traveling construction group.

"It took us a while to figure out, but after some experimenting, we came up with a solution," he said. That answer was to build factory-finished clinics in a modular fashion. "We'd ship them out in big pieces like Lego sets, which allowed us to install sophisticated HVAC, electrical and plumbing inside the confines of the factory, and then find a local general contractor to do site work," he explained. While the process cost the same as a traditional build, the modular concept significantly expedited the process and assured consistency in quality and design.

Tannenbaum left NNA in June 2003 to cofound Diversified Specialty Institutes, Inc. (DSI), where he launched out to help other organizations achieve similar construction goals. One of his first projects was a 24-bed hospital in Pennsylvania, which went from groundbreaking to being licensed in only 14 months. In 2005, Tannenbaum led the formation and expansion of DSI Renal, Inc. (an affiliate of DSI), a company that operated over 110 dialysis centers across 26 states, and served as its chairman and CEO. DSI continued to use the pre-fabricated building methodology to expand its footprint in dialysis.

In late 2008, Tannenbaum left DSI Renal to found Sanderling Healthcare, LLC, to focus on efficient healthcare facility construction in rural communities. He's also worked with LifePoint Hospitals on expansions in Arizona and Kansas, with a project in Arizona going from blueprint to state licensing in 16 weeks.

In Dodge City, Kan., Sanderling's 14,000-square-foot addition included complete labor and delivery suites, along with a NICU nursery. "Looking at the end result, you can't tell the difference in what we built and what was built onsite," he said. "Construction looks identical, but by fabricating it in the factory, splitting it into 15 sections for transport and installing it onsite, our clients found a faster way to get exactly what they needed."

"Whether we're working with healthcare facilities, physician offices, ERs or dialysis clinics, the common thread is a lot of electrical wiring, plumbing and complicated HVAC systems, so we've learned how to prefab interior walls within those panels," Tannenbaum said. "Not only does it expedite the process, but it saves time and hassle trying to coordinate the various tradesmen who are often working around each other. It's all done assembly-line style, so there are no conflicts of trades."

Sanderling still welcomes the occasional outside project but is ultimately in the dialysis business through a sister company (Sanderling Renal Services-USA), with seven clinics in full operation and four more in planning or construction phases. Their focus remains on underserved markets like Crescent City, Calif., where the nearest dialysis clinic was 75 miles away, and Ely, Nev., where patients were driving five hours to the nearest clinic.

Since nephrologists tend to live in larger cities, Sanderling has been a leader in the use of telemedicine to bring nephrology and dialysis to rural hospitals. Their 60-plus providers, which include members of their own National Telenephrology Associates P.C., and members of renal division faculty at Emory University, University of Alabama and University of California, makes nephrology consultation and in-patient dialysis available 24/7 to hospitals in 10 states including Hawaii.

"The telemedicine hospital segment has grown so rapidly, and the number of kidney failure patients is expected to double over the next 10 years," noted Tannenbaum. "Combine that with the shrinking number of people to provide care, and telemedicine will become for nephrology what it became for radiology years ago."

In an effort to staff clinics and create opportunity for the underserved in Sanderling's urban communities, the company also has created a jobs training program for HUD housing residents to become certified clinical dialysis techs, both in clinics and patient homes. Tannenbaum said only 2 percent of patients traditionally receive home hemodialysis, but Sanderling has taken that number from 2 to 55 percent in Nashville, reducing hospitalization rates by 50 percent.

"When patients are too sick to receive treatment, they often end up in the ER," said Tannenbaum. "By sending a tech to their homes, they can get the care they need. We're doing things no other companies have the inclination to do ... but we see opportunities for patients, and then we figure out how to make it feasible. We're on a mission."