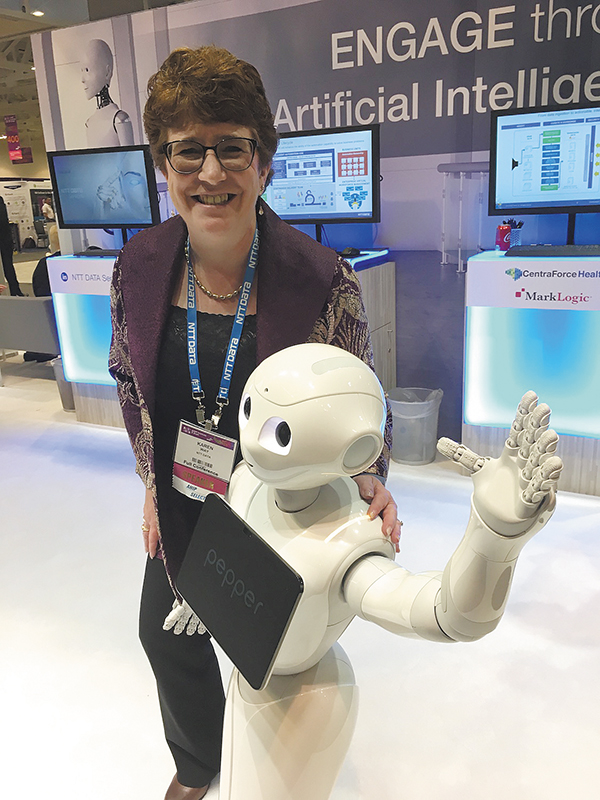 Once found only in the realm of science fiction, machine learning and artificial or augmented intelligence are now part of the everyday lexicon. During the recent America's Health Insurance Plans (AHIP) Institute & Expo, held June 19-21 in Nashville, an entire conference track was devoted to data, analytics and actionable intelligence to enhance both operations and clinical care.

"Machine learning gives you the ability to set up a process that gets better over time," pointed out presenter Yan Chow, MD, MBA, the global healthcare leader for Automation Anywhere. "Think of automation not as a scalpel ... but as a Swiss Army knife. It's not a tool. It's a tool box."

Karen Way, global practice lead of data and intelligence with NTT Data, also noted AI isn't simply one application or tool. Working for the systems integration company's Solutions, Strategy & Innovation Team, Way helps both health plans and providers identify new strategies to solve problems ... whether that be through technology, people, process or in a combination of disciplines.

"Artificial intelligence covers so much," she noted of the range of applications under the umbrella. "It can be robotics process analysis or automation. It can be natural language processing, machine learning; it can be just simple reporting. Traditional retrospective reporting - that's a type of AI because you get intelligence from the data."

A process, Way continued, doesn't have to be 'done by a robot' to be AI. "It's all about the intelligence and the actionable outcomes that you can get from the data ... no matter how you get there ... again, whether it's people, process or technology," she pointed out.

She said however data is collected, the key is to put actionable intelligence to work to inform business and clinical decisions. Although healthcare has traditionally been a siloed industry, Way said convergence trends that have seen big mergers between companies occupying different sectors within the industry, along with a focus on coordinated care across the continuum, are beginning to break down proprietary obstacles and encourage data sharing.

"I think those barriers are going to start to crumble," Way said. "Having all the clinical data that's in an EMR - there's so much more there that's not on a claim, that a health plan doesn't know about - we can provide better care and give better outcomes if we just share the data and be more realistic about it."

Pointing to a theme outlined in an earlier session, she added, "Don't we have an ethical obligation that if we know something that is going to help someone ... or a population of someones ... shouldn't we make that known? To say, 'Look, this population has this risk, and here's something we can do about it.'"

Harnessing the power of AI, said Way, makes it possible to take that next leap beyond the predictive analytics of who might be impacted by a risk factor or set of factors to prescriptive measures to actively intervene to improve outcomes and health.

"In the healthcare industry, patient engagement is critical to optimizing health outcomes," said Cianciolo. "New machine learning technologies will have a profound impact on the ability of healthcare professionals to engage with patients at scale and in a personalized, optimized way."

She continued, "Patients can be placed on automated journeys based on their individual needs, and then contacted via their preferred channels, with personalized requests and even optimized rewards. As members engage and start to change their behavior -- for example, responding to text messages more often -- machine learning would recognize that and allow healthcare professionals to optimize their communication strategy accordingly. In the end, AI and machine learning will help these populations get to the care they need by identifying, predicting and automatically triggering engagement with patients at the right time via the right channel to optimize ongoing care management."

Thomas Mason, MD, chief medical officer for the Office of the National Coordinator for Health IT, discussed the unintended consequences of rapid adoption of EHRs in the wake of the HITECH Act that included interoperability issues and systems not in alignment with the end user's workflow. However, he continued, the 21st Century Cures Act includes sweeping policies focused on advancing Health IT. With the law's call for standardized, open application programming interface, Mason said, "We see it being revolutionary in healthcare - not only standardized APIs to help with interoperability, but we really see a vision of a learning health system." He added the goal is to enable AI and machine learning to truly move population health forward.

Along those lines, Mona Siddiqui, MD, MPH, chief data officer with the Immediate Office of the Secretary of HHS, said there has been a concerted effort to use data internally to become more transparent and to share that data across the 29 different business units of HHS to improve health. However, she continued, using data within a framework that both meets health needs and adheres to regulatory mandates including privacy is the first step. "You can't have AI until you do the non-glamorous part of the job, which is to create the infrastructure," she pointed out.

Siddiqui also noted 'healthcare data' extends far beyond what is available in an individual's health record. "There are vast amounts of predictive health data out in the internet-of-things that are as important as the data in a patient's EHR. We need to start thinking about what are the different ways in which non-traditional data is being used to inform healthcare." She added this additional data, which isn't regulated by HIPAA, is tasking HHS with thinking about privacy in a different, more expansive way that tries to strike a balance between personal protections and unintentionally stifling innovation that could improve outcomes.

During an afternoon session, panelists Vindell Washington, MD, and Somesh Nigam, PhD, discussed how BlueCross BlueShield of Louisiana (BCBSL) is putting AI to work to achieve clinical transformation in a market that often ranks poorly for health outcomes.

Washington, executive vice president and chief medical officer for BCBSL, noted the United States spends a great deal on healthcare (close to 18 percent of GDP) but ranks behind many other countries in social services spending. In Louisiana, Washington said actual care delivery is on par with other states but health rankings are drug down by factors including pollution, violence, literacy, and a range of other social determinants negatively impacting significant portions of the community.

He added most gains in medicine have come from advancements in drugs and devices ... not in the way care is delivered in practices all across the country. Showing a side-by-side picture of a doctor's office from 1930 and one from today, the similarities were striking.

"You don't get to a new normal or new place in the delivery system by doing the same things you did in 1930," Washington pointed out. "Technology has reached a point where change is possible."

He added it is no longer enough to be predictive by simply identifying high-risk patients. Instead, he said it is time to become prescriptive in figuring out how to actively intervene in ways that might not be traditionally considered 'medical.' For example, Washington said, all diabetics should receive the necessary medications to manage their disease. However, using algorithms to identify the highest risk patients might require physically sending someone into those members' homes to look at the food in the refrigerator and medicine in the cabinet to help them improve control.

Washington said BCBSL launched a community nurse program to reach those most in need of active engagement and management. "They only take the tough cases," he said. "We call them detective nurses," Washington continued of sending the clinicians out in the field to track down patients who aren't compliant with a care plan and find out why - whether it's insufficient funds for medicines or nutritious foods, poor access to transportation to appointments, or a lack of understanding about their disease. Once the nurses connect with the patients, data has shown the members are much more likely to stay engaged and stick with the program.

"We can afford to deploy an expensive resource if we can narrow the target down with AI," he noted. "We really believe the punchline here is that it helps us make our care coordination outreach more effective."

Nigam, senior vice president and chief analytics and data officer for BCBSL, agreed. He said that while prospective analysis might pinpoint an obese population as being at higher risk for diabetes, it isn't terribly accurate since only about 30 percent of those patients become diabetic. "And it's an impossible task for 100 people to manage 100,000 people," he pointed out of any health plan trying to take a shotgun approach in the hopes of addressing those most in need of extra efforts. "What AI does is make it more precise in trying to predict a fraction of a percentage of the population who needs additional help on any given day."