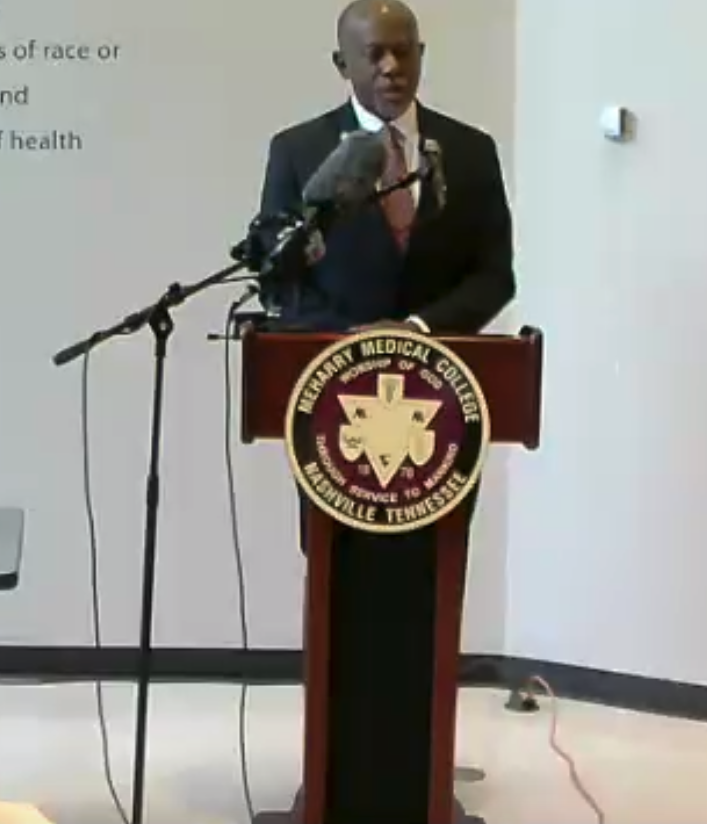 Meharry Medical College CEO & President, James Hildreth, MD, PhD, gave students a reason to rise and shine during an early morning announcement on Thursday. He stood before students joining in person and by Zoom to announce the school has received a $34 million gift from Bloomberg Philanthropies and Michael Bloomberg to help increase the number of Black doctors serving patients nationwide.

Most days, said Hildreth, Meharrians quietly go about their business learning and perfecting their craft, saving lives and serving the underserved with the only recognition being knowledge of a job well done. "Today, Meharrians, is not one of those days," Hildreth said with a large smile. The gift, the largest by far in the school's 144-year history, means that each and every student will be eligible to apply for a scholarship of up to $100,000 to ease the debt burden of medical school.

The generous gift not only puts medical school in reach for those who might have otherwise given up on the dream for financial reasons, but it also frees up resources at Meharry to be able to invest in programming and other priorities. "It's truly transformational for us," Hildreth said.

He added the gift extends beyond Meharry to the three other historically Black medical schools in the country - Morehouse, Howard and the Charles R. Drew University of Medicine and Science - for a total of $100 million in gifts. The grant is the first investment of Bloomberg Philanthropies' Greenwood Initiative, an effort to accelerate the pace of Black wealth accumulation and address systemic underinvestment in Black communities.

COVID-19 has once again underscored the health disparities in the country with Black Americans disproportionately likely to die from the virus. In a release about the gift, Bloomberg Philanthropies noted data shows Black patients have better outcomes when treated by Black doctors, yet only 5 percent of practicing physicians in the U.S. are Black. Representation matters for several reasons, not the least of which is that Black doctors often serve the underserved. Hildreth said 81 percent of Meharry graduates choose to care for patients who often have limited access to the larger healthcare system.

The physician-scientist and academic leader said he was very mindful that the road to this life-changing grant was paved by the previous generations of Black doctors who struggled to access education and weren't allowed to see patients in white hospitals. "We stand on their strong, unbending shoulders, and we are grateful," he said.

Hildreth added his deep gratitude to both Bloomberg Philanthropies and to Michael Bloomberg for the generous gift that will have a profound impact on Meharry students and in communities across the country for many years to come.