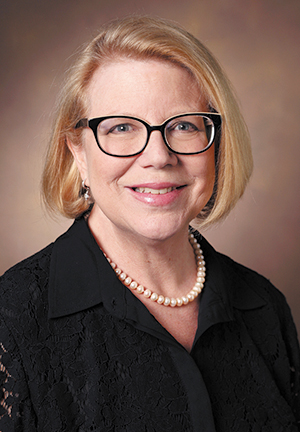 Pam Jones always wanted to be a nurse. "I came to the healthcare profession very naturally. My father was a physician, and my mother was a nurse." she said of growing up in a medical household. What she didn't know in the beginning was how much she would come to love being a nurse leader.

Undergraduate studies at Vanderbilt University School of Nursing brought the Florida native to Nashville. After earning her degree, she moved to Atlanta for a staff nursing position with the Henrietta Egleston Children's Hospital in the Neonatal Intensive Care Unit, the first new graduate the hospital had ever hired into the NICU. Enticed to return to Vanderbilt, it didn't take long before Jones was approached about taking on more responsibility in a supervisory role.

"I had never considered leadership and management," she recalled. "About a year later, there was a vacancy in the Pediatric ICU. It was a stressful position, and there had been five managers in five years. I was asked to apply, and I wound up staying in the position five years. That's when I really fell in love with leadership."

With her interest awakened, Jones enrolled at her alma mater for graduate studies, earning her master's in 1992 and completing her Doctor of Nursing Practice just over a decade later. "I have had the advantage of an incredible education and excellent mentors," said Jones. "I have obtained three degrees from Vanderbilt University School of Nursing. All of these educational experiences have shaped who I am as a nurse and a leader."

With each academic pursuit, Jones credited a cadre of professors for helping expand her worldview. "I also had the opportunity to work closely with Dean Linda Norman and the late Dean Colleen Conway-Welch. Both women are incredible role models of what a female leader looks like," she said. Similarly, Jones has been greatly influenced by other talented nurse executives including Marilyn Dubree at Vanderbilt and June Bowman, the former chief nursing officer at Centennial Medical Center.

"I have gained so much from mentors over the years that I am absolutely passionate about mentoring other leaders," said Jones. She was thrilled when a long-time mentee called one day, saying she was in a difficult position but 'channeled her inner Pam Jones' to address the situation. "I could have retired happy that day," Jones laughed. Considering her broad responsibilities at Vanderbilt and in the community, thank goodness she didn't!

"I have the perfect job at this point in my career," Jones noted of her work that includes serving as advisor and subject matter expert for the Master of Nursing Science and Nursing and Healthcare Leadership programs, serving on the DNP Curriculum Committee, teaching economics and finance, and overseeing community outreach and operations. "The School of Nursing has a 30-year history of nurse practitioner-based clinics for the underserved," Jones added of this critical component of work, which improves access to vulnerable populations.

"The beauty of leadership is that you can use your talents to create environments where those around you can succeed and do wonderful things for patients, families and communities," she said. "I have a particular passion for advanced practice providers - APRNs and PAs. I believe that they are an important part of the future of healthcare."

Jones noted the work of nurses and advanced practice providers has been in the spotlight during COVID-19. "I'm so proud of all healthcare but especially nurses who have stepped up. It's what we're trained to do in emergencies." She also said many lessons will come out of the pandemic to inform and improve the future delivery of care.

As part of her mission to help create the next generation of talented, innovative advanced practice providers who will lead that work, Jones often shares some of her favorite insights. She stresses the need to be brave and appropriately stand up for beliefs, to invest in yourself and in developing emotional intelligence, to keep things in perspective and stay balanced, and to always remember to laugh.

Husband Glenn, son Hayden, and furry family members in the form of two dogs and a cat provide the perspective and plenty of laughter. While she and her husband primarily live in Nashville, the couple also has a farmhouse in Greenbrier. "I have recently discovered a passion for rural living," Jones said after spending more time at the farm over the last few months. "This 'city girl' has even put in her first bed of tomatoes," she added with enthusiasm.

Jones is quick to remind students and mentees that investing time in yourself to recharge doesn't take away from the work at hand. Instead, it provides the energy needed to pursue your passions.