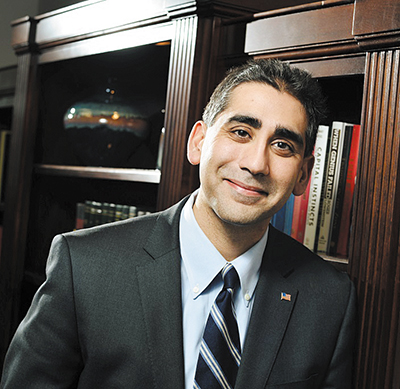 Inspiration can come from a number of places. For Manish "Manny" Sethi, MD, the greatest influence was found at home.

Born in Ohio to immigrant parents - both physicians in their native India - Sethi grew up in the small community of Hillsboro, Tenn. just outside Manchester. It was here he learned the importance of lending a hand.

"My parents were small town doctors who ran the only medical clinic in a town where 90 percent of people fell below the poverty line," Sethi said. "I really learned the power of local community and people helping people."

As respected leaders in their community, Sethi's parents walked alongside patients as counselors, friends and ambulance drivers, venturing out at night in the family car to drive a patient to the hospital. At age 10, Sethi watched as his father saved someone's life at the grocery store.

"I always knew I wanted to make a difference like they did," Sethi said. "I just wasn't sure how I was going to do that."

In 2005 he received his medical degree from Harvard Medical School before completing postgraduate training in general surgery at Massachusetts General Hospital. He went on to complete the Harvard Combined Orthopaedic Residency Program and returned to Tennessee for an Orthopaedic Trauma Fellowship at Vanderbilt University Medical Center.

"Tennessee had done so much for me and my family, and I just wanted to give back," Sethi said of his move home.

Sethi's brother - a spine surgeon in Seattle - had encouraged him to pursue orthopaedics. As fate would have it, hip and knee replacements were only the beginning for the young surgeon.

"One day in clinic, I was on trauma rotation and was really drawn to these patients and their problems," Sethi said. "I felt a strong social component to help them, and it was the perfect fit."

While practicing as an orthopaedic trauma surgeon, Sethi was disturbed by the number of co-morbidities he saw on a daily basis. "I felt like, as a state, we were spending 40 percent of the state's budget on health for problems we could be tackling on the front end," he said.

Sethi began visiting state officials to discuss preventative measures, but he was often met with little interest. "One day my wife said, 'What if we just start focusing on getting people healthier across Tennessee?'" Sethi recalled. That conversation was the start of Healthy Tennessee, a grassroots effort to bring communities together around the goal of better health.

The initiative started in 2011 with a modest health fair in Sethi's hometown of Manchester, where 150 residents were seen by healthcare volunteers in a community center. Word of the Sethis' efforts soon spread, as did interest from organizations looking to partner with the group. "All of a sudden we were doing health fairs with 700 attendees and 200 volunteers," Sethi said. "It just took off."

The movement soon grew to include mobile lab, mammography and x-ray services, along with diabetic retinal screenings.

"Healthy Tennessee galvanized communities across the state to take control of their own healthcare destiny," Sethi said. "We started to develop an idea of a future model that doesn't require a large doctor's office, and where you could have a face-to-face encounter with a provider and be out in 45 minutes."

Before long, the organization was hosting regional summits and compiling lists of potential partners in 95 counties. "This started as a community health model driven by volunteer spirit, but we needed to harness the power of all these organizations to get them moving in the same direction," Sethi explained.

As the vision grew, so did services available in each local community. For example, the group recently collaborated with UnitedHealthcare to pilot a food bank model, which proved effective at engaging those who might otherwise resist medical treatment. The model is a far cry from what Sethi calls 'the ivory tower approach to population health.'

"Dad told me, and I carry it with me every day, that people don't care what you know till they know that you care," he said. "With Healthy Tennessee or my trauma practice, you have to spend time with people and gain their trust in order for them to believe you and change their behavior. You have to reach everyone in a different way."

Sethi's approach is catching on ... and catching the attention of healthcare and political leaders nationwide. In 2014, he was named among HealthLeaders Magazine's "Top 20 Leaders in Medicine" Award; and in 2016, the surgeon was invited to the White House to discuss Healthy Tennessee's community engagement and impact statewide.

Today, the busy father of two continues his work at Vanderbilt while managing oversight of Healthy Tennessee. He is lead author of the book Orthopaedic Traumatology: An Evidence-Based Approach. In 2015 he also authored a book based on his own experiences and those of his patients, The American Dream in Tennessee: Stories of Faith, Struggle and Survival.

Currently, together with the RWJ Center at Meharry Medical College, he is also leading a public-private partnership with local schools to develop violence prevention programs in order to reduce trauma injuries associated with violence.

"My goal is to make this state healthier from the front lines," Sethi said. "Healthcare is all about being local, and you can't understand the dynamics of a different community, even within Tennessee, without being on the ground. Every human being in a community brings something to the table. If you harness that energy and power, amazing things can happen."