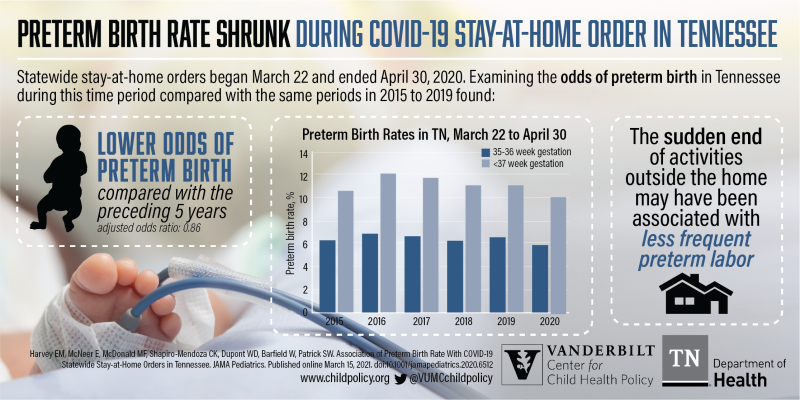 Preterm infants have higher morbidity and mortality risks than babies born at term.

Senior author Stephen Patrick, MD, director of the Vanderbilt Center for Child Health Policy and a neonatologist at the Monroe Carell Jr. Children's Hospital at Vanderbilt and his colleagues had observed in March that there appeared to be fewer infants than usual in the NICU at the children's hospital. Along with colleagues at Tennessee Department of Health and the Centers for Disease Control and Prevention, the team aimed to test if these anecdotal observations were related to the statewide lockdown order.

The study is the first in the US to confirm the trend that more persons staying at home, essentially on forced bed rest, reduced the number of late pre-term infants (34-35 weeks).

"Preterm birth affects 1-in-10 infants nationwide, taking a substantial toll on children, families and communities," Patrick said. "Our study, coupled with similar studies from Europe, provide initial evidence that COVID-19 stay at home orders were associated with reductions in spontaneous preterm birth. While encouraging, we need to ensure other pregnancy complications, like stillbirth, did not increase during this time period."

"Although we saw less infants born preterm, we also saw infants born during this time required more respiratory assistance at birth, which may suggest they were sicker and warrants further investigation," she added.

Future research could explore whether other US states observed similar reductions, Patrick said, and how obstetric interventions for fetal and maternal complications, or lack thereof, may have contributed.