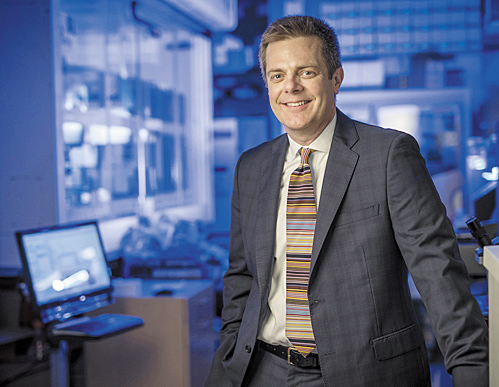 A monoclonal antibody cocktail against the COVID-19 virus discovered at Vanderbilt University Medical Center and developed by AstraZeneca reduced the risk of symptoms in a study of immunocompromised and chronically ill adults later exposed to the virus by 77 percent, the company announced in late August.

Based on the positive results from the PROVENT Phase III trial, AstraZeneca will seek regulatory approval for AZD7442, a combination of two long-acting antibodies, as a one-dose, pre-exposure prophylaxis that for chronically ill people might be more effective than a vaccine.

AZD7442 is the first antibody combination (non-vaccine) modified to potentially provide long-lasting protection that has demonstrated prevention of COVID-19 in a clinical trial, company officials said. The trial included more than 5,000 participants, and more than 75 percent had conditions that can cause a reduced immune response to vaccination.

Delivered by intramuscular injection, the antibody treatment was well tolerated with only minor side effects and could afford up to 12 months of protection from COVID-19, according to officials. Preliminary laboratory findings also suggest that AZD7442 can neutralize recent emergent variants of the virus, including the delta variant.

"It's deeply gratifying to see the antibodies we isolated under challenging circumstances, in the middle of the international lockdown last spring, protecting the most vulnerable amongst us," said James Crowe Jr., MD, director of the Vanderbilt Vaccine Center who led the VUMC research effort. "This single-shot prevention is likely to be a game changer for at-risk patients."

"The near-term availability of AZD7442 comes at an opportune time," added Robert Carnahan, PhD, associate director of the Vanderbilt Vaccine Center. "It is clear that we need additional solutions beyond vaccines to protect those most vulnerable members of our society, such as the immunocompromised." He added, "These studies specifically targeted patients with comorbidities where interventions beyond a vaccine are warranted."

The original antibodies that were the basis for the engineered long-acting antibodies that make up the AZD7442 two-antibody cocktail were isolated last year at VUMC. Crowe and his colleagues have developed ultra-fast methods for discovering highly potent antiviral human monoclonal antibodies and validating their ability to protect small animals and non-human primates.

Six of the antibodies were licensed to AstraZeneca in June for advancement into clinical development. In October the company announced it was advancing into Phase III clinical trials an investigational therapy consisting of two long-acting antibodies discovered at VUMC and optimized by AstraZeneca.